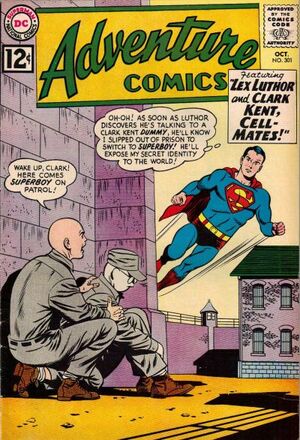 Lex Luthor frames Clark Kent after Clark's father, as a member of the parole board, refuses to parole Luthor. Clark ends up having to share a cell with Luthor. (13 pages)

Appearing in "The Secret Origin of Bouncing Boy"Edit

Synopsis for "The Secret Origin of Bouncing Boy"Edit

The Legion holds an "open audition". They reject a powerless rich kid named Lester Spiffany and an applicant called Storm Boy who fakes his powers with a hidden weather control device. Bouncing Boy is then randomly chosen to tell his origin. After gaining his bouncing powers by accidentally drinking a super-plastic formula, he is rejected for Legion membership. But when Bouncing Boy uses his rubbery properties to ground himself so he can defeat a criminal with an electric shocker, he is invited to join the Legion. His story encourages the new applicants to keep trying. (13 pages)

Retrieved from "https://heykidscomics.fandom.com/wiki/Adventure_Comics_Vol_1_301?oldid=1399430"
Community content is available under CC-BY-SA unless otherwise noted.