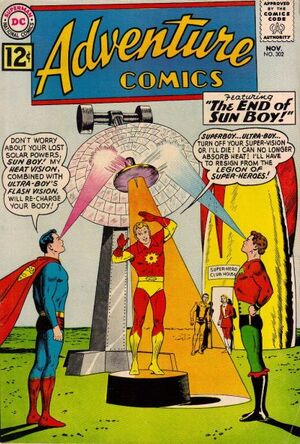 Superboy is summoned to a civilization beneath the Earth’s surface to take the place of a robot created in his own image.

Cosmic Boy, Saturn Girl, and Sun-Boy make a trip to Metropolis where the people are unveiling the first of a series of statues in honor of the Legion of Super-Heroes. The first statue is revealed to be of Sun-Boy, who has to use his powers to destroy the statue when it begins to topple, threatening to crush spectators of the event. Flying back to headquarters later, Sun-Boy realizes his powers have run out when he cannot use them to illuminate a city going through a black out.

This prompts Sun-Boy to try and restore his powers, using a similar atomic device that first gave him his powers, and later a volcano, however both attempts fail to restore them. When an entomologist visits the Legions base to gift them with insects from other planets, Sun-Boy's powers briefly come back. Later when Ultra-Boy and Superboys arrive for a scheduled meeting, Sun-Boy asks them to help try to restore his powers using a mirror device and both heroes x-ray visions. This attempt also fails. After giving up, Sun-Boy accepts the fact that his powers are gone, and he is asked to resign from the Legion, he cleans out his locker and supplies and leaves.

Later, while watching the Legion in action, Sun-Boy is visited by Bouncing Boy who has come to take his Legion monitor. Later, Kranyak, a villain which Sun-Boy helped incarcerate, learns of the news about Sun-Boy's powers escapes from prison. Reuniting with his gang, Kranyak attacks Sun-Boy to learn if the stories are true. Learning that they are indeed true, Kranyak tells Sun-Boy that he is going to destroy the other Legionaries. Realizing how to finally restore his powers, Sun-Boy travels to the planet Lurna. There he makes a flame-beast blast him with it's flame breath, this miraculously restores his powers.

Sun-Boy then returns to Earth where he stops Kranyak and his gang from crushing the Legion's base with a giant chunk of ice and easily defeats the crook. After Kranyak has been turned over, Sun-Boy explains to the Legion how his powers were restored: That the only way his powers could be restored would be exposure to sufficient heat energy from living creature that has heat-based powers. He goes on to explain he figured it out when he touched a firefly from the planet Lurna, and so went there find a creature with stronger flame powers. He also explains that the reason why his powers weren't restored by Superboy and Ultra Boy is because they are really robots.

This was figured out while Sun-Boy watched the Legion in action and the two heroes were drawn towards Cosmic Boy whenever he used his magnetic powers. When revealed as robots, the Legion checks out their inner workings and learn that they were sent to the future by Ultra Boy and Superboy, who were busy in the 20th Century celebrating the birthday of Pete Ross. The robots were sent to the future to take their place, and they caught caught in a storm during their travel through the time barrier which caused them to forget they were really robots. With all the loose ends tied up, Sun-Boy is welcomed back into the ranks of the Legion of Super-Heroes.

Retrieved from "https://heykidscomics.fandom.com/wiki/Adventure_Comics_Vol_1_302?oldid=1399431"
Community content is available under CC-BY-SA unless otherwise noted.