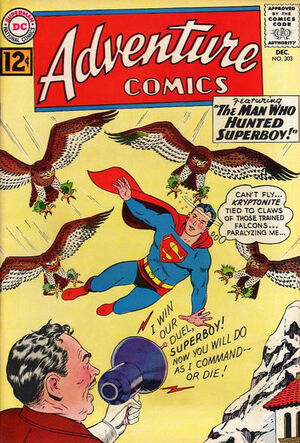 I know what you're thinking. "So, he's an unusual freak! So what? That doesn't qualify him for Legion membership." Well, you're wrong. No matter where or how a foe ever imprisons us, I could always eat our way to freedom!

Appearing in "The Man Who Hunted Superboy"Edit

Synopsis for "The Man Who Hunted Superboy"Edit

Clark falls out of an airplane and lands in the country of Sardonia where he is mistaken for Prince Mark. Mark's fiancee, Zorina, breaks up with him because he is a weakling. Superboy spots the real Prince Mark, saves his life and uses his super senses to discover that Lord Hawke is trying to kill Prince Mark in order to ascend to the throne. After the two switch identities, Superboy (as Prince Mark) survives multiple attempts on his life (winning Zorina's heart in the process) accrediting some of his "rescues" to Superboy. Prince Mark, meanwhile, is secretly learning various fighting disciplines. Lord Hawke begins to suspect Mark and Superboy switched places and he devises a Kryptonite trap to kill Superboy. He throws Superboy and the kryptonite a pit. Mark attempts a rescue but is captured and thrown in the same pit after refusing to abdicate the throne. Mark manages to get the kryptonite out of the pit and he and Superboy switch clothing again. Prince Mark prevents Lord Hawke's coronation. Lord Hawke escapes and tries to loot the castle but Superboy stops him. Clark returns to Smallville telling everyone he was saved by Superboy.

Appearing in "The Fantastic Spy!"Edit

Synopsis for "The Fantastic Spy!"Edit

Sun-Boy and Lightning Lad are recuperating in the hospital after sustaining injuries on a mission. Sun-Boy is given a curative capsule in his injured ankle by Dr. Landro and told that he will be cured in a few days. Later, the Legion has a meeting where they meet their newest member: Matter-Eater Lad, a boy who can eat and digest anything.

After a series of missions end in failure, the Legion begins to suspect that there is a traitor in their midst. At the same time the criminal alien known as Meglaro manages to escape from prison. Brainiac 5 builds a device which leads him to the truth: None of the Legion members have turned traitor, but they have been betrayed by Dr. Landro. Using a device, the Legion learns that Landro put a shrunken spy in the "curative capsule" which was implanted in Sun-Boy's leg, and that's how mission secrets were revealed to the enemy. With the spy plot revealed, Superboy is dispatched to defeat and recapture Meglaro, and the other Legion members work to remove the capsule from Sun-Boy's ankle and capture the spy.

Retrieved from "https://heykidscomics.fandom.com/wiki/Adventure_Comics_Vol_1_303?oldid=1399432"
Community content is available under CC-BY-SA unless otherwise noted.