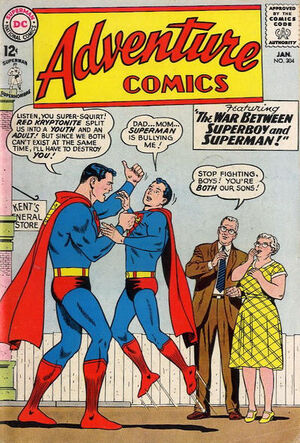 Appearing in "The War Between Superman and Superboy!"Edit

Synopsis for "The War Between Superman and Superboy!"Edit

Roz-Em, a double for Jor-El (and the future Superman), a Kryptonian criminal once captured by Jor-El and Nim-El, breaks free of his imprisonment, learns of Superboy’s existence, and disguises himself as a time-lost Superman in an effort to get Superboy exiled from Earth.

Appearing in "The Stolen Super-Powers!"Edit

Synopsis for "The Stolen Super-Powers!"Edit

Shortly thereafter, Saturn Girl becomes a strict and cruel leader, "punishing" Legion members for being unable to follow her orders. As punishment she would "ground" members from the Legion and use a device that would steal their powers and give them to Saturn Girl. When the threat of Zaryan is on it's way, Saturn Girl heads out on her own to tackle Zaryan's menace by herself. However, Lightning Lad intercepts the rocket first and is blasted with a ray while he destroy Zaryan's rocket.

When Lightning Lad finally dies, the entire Legion gathers and has a funeral to remember to their fallen friend, Garth.

Retrieved from "https://heykidscomics.fandom.com/wiki/Adventure_Comics_Vol_1_304?oldid=1399433"
Community content is available under CC-BY-SA unless otherwise noted.