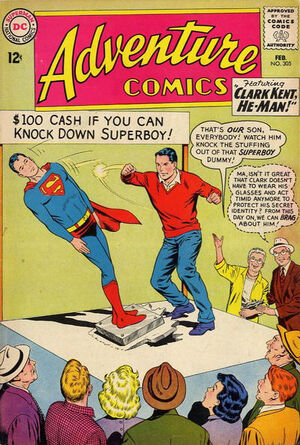 Jonathan Kent gets tired of being shamed by Clark Kent’s “meek and mild” pose. He packs up the family and they move to Rail City, where Clark becomes “Mark Denton”, sports star and he-man, but it proves to be difficult to operate thus as Superboy.

Appearing in "Secret of the Mystery Legionnaire!"Edit

Synopsis for "Secret of the Mystery Legionnaire!"Edit

With the recent demise of Lightning Lad, the Legion of Super-Heroes begins looking for an adequate replacement to fill the void left by the heroes death. After testing a series of would-be Legionnaires who's powers either turned out to be duds or artificial, the Legion is met by a costumed youngster calling himself Marvel Lad.

Wanting nothing but the best possible candidate to take the late Lightning Lad's place, the Legion puts Marvel Lad on a series of complex tests to see if he stands up to the Legion's values and codes. When Marvel Lad is able to complete all the missions the Legion asks him to reveal the origins of his powers before he is introduced into the group.

The next day Marvel Lad arrives and reveals that he is really Mon-El in disguise. He then reveals to an astonished Legion that Brainiac 5 had developed a new version of serum XY-4 to try and cure Mon-El of his lead poisoning that forced him to reside in the Phantom Zone. To test out if the serum will work, but not get the other Legion's hopes up, Mon-El took on the guise of Marvel Lad and try out for Legion membership, that way if the serum didn't work the Legion wouldn't be disappointed.

Having passed the Legion's tests, Mon-El is welcomed into the Legion as their new member, and Mon-El returns to the Phantom Zone one last time to get the last laugh on the criminals trapped there who have taunted and tormented him during his time living within the Zone.

Retrieved from "https://heykidscomics.fandom.com/wiki/Adventure_Comics_Vol_1_305?oldid=1399434"
Community content is available under CC-BY-SA unless otherwise noted.