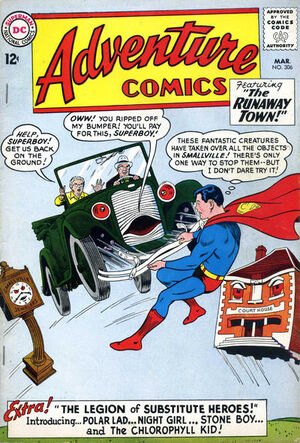 Appearing in "The 5th Dimensional High-School!"Edit

Synopsis for "The 5th Dimensional High-School!"Edit

Mister Mxyzptlk hopes to win top honors in his class on Practical Joking by tricking Superboy and Lana Lang into the Fifth Dimension, but the Boy of Steel turns the tables on him.

Appearing in "The Legion of Substitute Heroes!"Edit

Synopsis for "The Legion of Substitute Heroes!"Edit

After being rejected for membership in the Legion of Super-Heroes, five super-powered teens decide to join together to become the Legion of Substitute Heroes. They are: Night Girl, who has super-human strength but only during the night; Fire-Lad who can breath fire; Chlorophyll Kid who can control plant life; Polar Boy who has freeze powers; and Stone Boy, who can turn into an immobile, and indestructible stone statue at will.

Retrieved from "https://heykidscomics.fandom.com/wiki/Adventure_Comics_Vol_1_306?oldid=1399435"
Community content is available under CC-BY-SA unless otherwise noted.