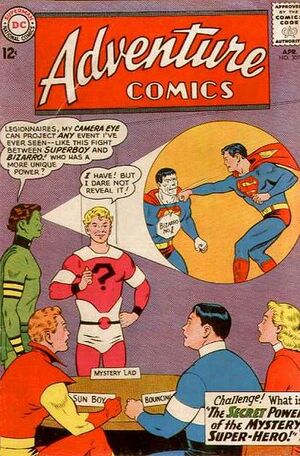 Appearing in "The Confession of Superboy!"Edit

Synopsis for "The Confession of Superboy!"Edit

Lana Lang exposes Superboy to Red Kryptonite, causing him to lose his power of speech, but he still protects his Clark Kent identity despite her attempts to expose him.

Appearing in "The Secret Power of the Mystery Super-Hero!"Edit

Synopsis for "The Secret Power of the Mystery Super-Hero!"Edit

With the space pirate known as Roxxas on the loose, looting various planets, the Legion of Super-Heroes decides to take on one more new member before tackling the criminal. After the typical number of "dud" heroes, the Legion agrees to select Mystery Lad, who only reveals the true nature of his powers to Saturn Girl in secret.

The Legion accepts him on Saturn Girl's say so, and Mystery Lad joins the group on their quest to stop Roxxas. During their battle, Mystery Lad exhibits different supposed abilities that keep the other Legion members missing. However, when Roxxas recognizes Mystery Lad for what he can really do - Change the properties of matter - Mystery Lad decides to turn himself over to Roxxas so nobody else gets hurt. However, when "Mystery Boy" refuses to turn objects into gold for Roxxas, he changes the gas aboard the ship into a toxic one that threatens to kill him. Roxxas and his goons, wearing space helmets manage to avoid the effects of the gas and try to make their escape. However, they are captured by the Legion who manage to arrive just in time to save Mystery Lad's life. In the aftermath of their adventure, Mystery Lad is accepted into the Legion, and rechristened Element Lad.

Retrieved from "https://heykidscomics.fandom.com/wiki/Adventure_Comics_Vol_1_307?oldid=1399436"
Community content is available under CC-BY-SA unless otherwise noted.