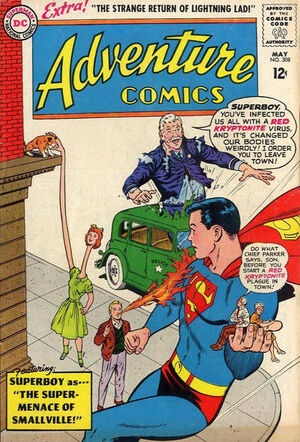 Lex Luthor teams with an Atlantean scientist to attempt Superboy’s destruction. As part of the plot, Kronn, the Atlantean, gives Luthor the plans for a radio beam that transmits mass hypnotic illusions, with which he makes Superboy and the residents of Smallville believe that Superboy has the power to induce transformations triggered by the titles of records Luthor plays on his disk jockey program. As a capper, Luthor directs Superboy to an “antidote” undersea...the site of a deathtrap by Kronn. But Superboy deduces the truth, turns Kronn over to the Atlantean police, and foils Luthor’s escape attempt.

Appearing in "The Return of Lightning Lad!"Edit

Synopsis for "The Return of Lightning Lad!"Edit

While draping a ceremonial cape on the grave of the recently deceased Lightning Lad, the Legion of Super-Heroes is shocked when Lightning Lad seemingly rises from his coffin, alive and well. After recharging his apparent lost powers, Lightning Lad rejoins the Legion. However, on their daily routine of missions, each of the Legion members (including Chameleon Boy's new pet Proty) begin to suspect that the person aiding them is not their Lightning Lad.

After busting up some alien criminals, the Legion figures out the truth, that this is not really Lightning Lad at all, but his twin sister disguised as him. She reveals that she took the body of her brother to a planet where there is perpetual lightning as a suitable resting place and decided to take his place to continue his heroic tradition in his place. With the truth revealed, the Legion accepts her into their team and she is rechristened as Lightning Lass.

Retrieved from "https://heykidscomics.fandom.com/wiki/Adventure_Comics_Vol_1_308?oldid=1399437"
Community content is available under CC-BY-SA unless otherwise noted.