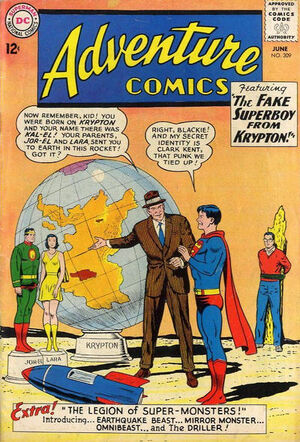 Appearing in "The Legion of Super-Monsters!"Edit

Synopsis for "The Legion of Super-Monsters!"Edit

With the other Legion members out on various mission, Saturn Girl, Chameleon Boy, Colossal Boy, Bouncing Boy, Brainiac 5, and Sun-Boy are tasked with selecting a new member into their group. When an applicant named Jungle King, who can control animals with his mind, tries to join the group he is rejected for membership as the animals he control can be easily startled and become a menace.

Angry that he had been rejected, Jungle King uses his powers to gather some of the most dangerous creatures in the universe and forms "The Legion of Super-Monsters" and renaming himself Monster Master for the purpose of terrorizing people and getting revenge against the Legion. His first attempt at revenge, toppling Sky City, is met with failure when the Legion arrives and stops the city from being toppled over, however Monster Master and his Super-Beasts manage to escape.

Tracking Monster Master to the planet Inshar, the Legion battle each of the Super-Beasts, and each are swiftly defeated. Ironically, Monster Master meets his own demise when he rejects a vapor-beast interested in joining his Legion of Super-Monsters. The rejected beast then touches Monster Master, killing him as when such a creature touches it's prey it becomes a lifeless vapor. With the menace of the Monster Master ended, the Legion marvel over the irony of their foes defeat.

Appearing in "The Fake Superboy From Krypton!"Edit

Synopsis for "The Fake Superboy From Krypton!"Edit

When ex-gangster Blackie Burke sees Superboy emerge from his secret exit, the Boy of Steel enlists Brainiac 5 and Professor Potter in a ruse that convinces Burke he was having an hallucination.

Retrieved from "https://heykidscomics.fandom.com/wiki/Adventure_Comics_Vol_1_309?oldid=1399438"
Community content is available under CC-BY-SA unless otherwise noted.