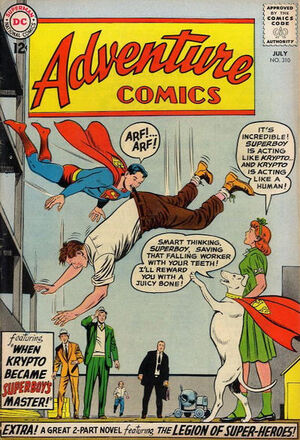 Appearing in "The Doom of the Super-Heroes!"Edit

Synopsis for "The Doom of the Super-Heroes!"Edit

The Legion of Super-Heroes are assigned to stop a masked criminal who has been terrorizing Metropolis. When the Legion finally confront the Masked Man, they soon realize he can mimic their powers and exhibit many more. During the course of their fight, the Masked Man manages to kill Ultra-Boy.

In subsequent battles, the Masked Man manages to kill all the Legion members until only Superboy remains. Superboy deduces that the Masked Man is Mxyzptlk V, the distant relative of Mister Mxyzptlk, the imp who pesters him in his own time. Using a word reversing device, Superboy manages to trick Mxyzptlk V to say his name backwards, sending him back to the 5th Dimension and reversing all the damage he'd done, including returning the dead Legionnaires to life.

Appearing in "When Krypto Was Superboy's Master!"Edit

Synopsis for "When Krypto Was Superboy's Master!"Edit

When a colleague questions Professor Lang’s translation of an inscription on a globe which is said to be able to magically exchange minds, Superboy pretends that he and Krypto have had their minds switched in order to teach the cynic a lesson.

Retrieved from "https://heykidscomics.fandom.com/wiki/Adventure_Comics_Vol_1_310?oldid=1399439"
Community content is available under CC-BY-SA unless otherwise noted.