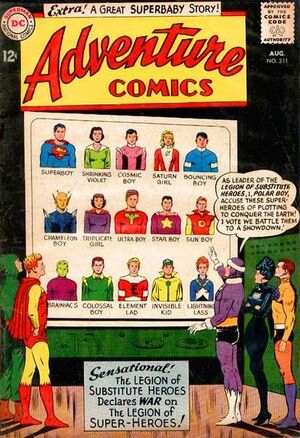 They're not the super-heroes at all! I suspected it when they destroyed our base and tried to kill us...

Appearing in "The War Between the Substitute Heroes and the Legionnaires!"Edit

Synopsis for "The War Between the Substitute Heroes and the Legionnaires!"Edit

When the Legion of Super-Heroes are called off onto a mission in space an alien craft lands on Earth. Finding it suspicious, the Legion of Substitute Heroes decide to check it out. After fighting off the ships defenses, they are chased away by members of the Legion.

Offering their aid to the Legion, the Substitute Heroes find that their idols have turned mean, and demand that they disband or be destroyed. Escaping, the group wonders what has gotten into the Legion of Super-Heroes. When Night Girl attempts to talk sense into Cosmic Boy, this leads the Legion to track the Substitutes to their secret headquarters to try and destroy them.

However, the Substitutes manage to hold their own, and reveal the "Legion" as members of the Zyzan race who posed as the Legion in an attempt to take over the Earth. With their true motives revealed, the Zyzan invaders are easily defeated by Polar Boy's freezing powers, and the Substitute Legion returns them to their own planet and decide to return to their relative secrecy, choosing to wait to reveal themselves to the real Legion. When the real Legion of Super-Heroes return from space from the fake distress call, they are left to wonder what to make of the alien ship that crashed on Earth.

Appearing in "Smallville's War Against Superbaby!"Edit

Synopsis for "Smallville's War Against Superbaby!"Edit

When Superbaby gets green cake frosting on his face and rides a cake pan he has squeezed into a giant disc, a science-fiction fan in Smallville thinks he is part of an alien invasion force.

Retrieved from "https://heykidscomics.fandom.com/wiki/Adventure_Comics_Vol_1_311?oldid=1399440"
Community content is available under CC-BY-SA unless otherwise noted.