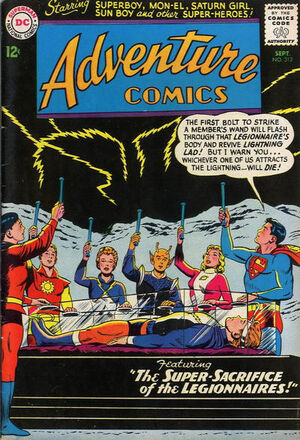 Appearing in "The Super Sacrifice of the Legionnaires!"Edit

Synopsis for "The Super Sacrifice of the Legionnaires!"Edit

When Superboy finds a world where the sun restores the people to life, it encourages him to go to the Legion and try to find a way to restore their deceased comrade, Lightning Lad to life.

After scouring the universe for different ways to restore Lightning Lad to life, the Legion cannot find a method that works. Traveling to his home world of Daxam with Saturn Girl, Mon-El comes up with another method. Bringing the Legion back to the Lightning World where Lightning Lad's body is kept, the shows them a special lightning rod which when struck by lightning would cause the life force from one being to transfer into another, restoring the dead body to life. With all the Legion members wanting to give their all to revive Lightning Lad, they all agree to hold a rod, leaving the choice of who will sacrifice their life to fate. However, when the a bolt seemingly strike Saturn Girl, the Legion are shocked to find that it was really Chameleon Boy's pet Proty in disguise. However, in spite of who sacrificed himself, Lightning Lad is restored to life. When the real Saturn Girl catches up with the Legion, she explains that as Proty was also a telepath, the creature learned of Saturn Girl's intention to sacrifice herself to restore Lightning Lad, and sacrificed itself in her place. With the truth revealed, the Legion takes a moment to mourn the loss of Proty.

When Superboy helps Lana Lang out in the jungle, it results in an offer for her to play a jungle princess in a Hollywood film. He wangles his way into the production and helps mess things up to prevent her from getting a swelled head.

Retrieved from "https://heykidscomics.fandom.com/wiki/Adventure_Comics_Vol_1_312?oldid=1399441"
Community content is available under CC-BY-SA unless otherwise noted.