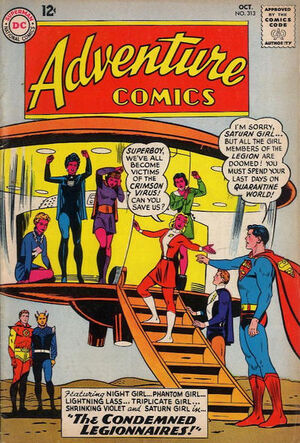 Appearing in "The Condemned Legionnaires!"Edit

Synopsis for "The Condemned Legionnaires!"Edit

With the arrival of Supergirl, who is immune to the virus, the male Legion members try to learn the origins of Satan Girl. When she proves immune to Kryptonite, Lead and an anti-android weapon, the heroes are puzzled to figure out her true identity. Unable to defeat her due to her superior powers, Supergirl has the Legion go and collect the Legion of Super-Pets, as Satan Girl's powers would not effect them. The Super-Pets manage to easily defeat Satan Girl, who is unmasked, revealing that she is really -- Supergirl!? The weakened Satan Girl explains that she is the product of Red Kryptonite, which Supergirl was exposed to upon entering the 30th Century. Knowing that she had only 48 hours of life, she adopted the guise of Satan Girl and created a device that would siphon the Red Kryptonite radiation and infect females with it, in hopes that once she had rid herself of the Red Kryptonite energies she could live past the 48 hour period which Red Kryptonite effects.

With her plan a failure, and the 48 hours running their course, Satan Girl merges with Supergirl. After wards, the Legion learns that Satan Girl managed to handle Green Kryptonite because she wore a lead suit. After this revelation, although they are victorious and their female members restored to normal, the Legion takes a moment to feel pity for Satan Girl, for all she wanted to do was live.

Years after first seeing the statues of his ancestors in the El family crypt, Superboy finds them floating in space, sprays them with lead, and completes the Kryptonian Father’s Day ceremony.

Retrieved from "https://heykidscomics.fandom.com/wiki/Adventure_Comics_Vol_1_313?oldid=1399442"
Community content is available under CC-BY-SA unless otherwise noted.