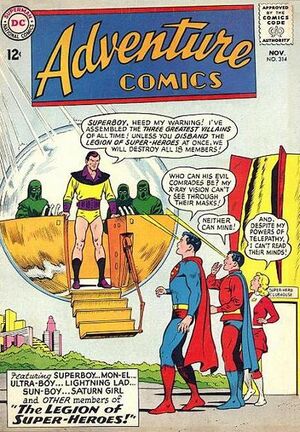 Superboy, you can't be Hitler in personality! You've got to remember who you are... fight this off...

Appearing in "The Super-Villains of All Ages!"Edit

Synopsis for "The Super-Villains of All Ages!"Edit

Posing as an applicant for potential Legion membership, the evil Alaktor manages to take x-ray photos of every device within Legion headquarters. Sneaking back into their base, Alaktor steals one of the Legion's time bubbles in hopes of recruiting histories most evil criminals. The Legion stumbles upon Alaktor's plot and try to stop him across different periods. However, Alaktor manages to avoid capture while recruiting Nero, John Dillinger, and Adolf Hitler from history and bring them to the 30th Century.

With a mind swap device, Alaktor manages to switch the minds of Hitler, Dillinger, and Nero into the bodies of Superboy, Mon-El and Ultra-Boy. The three then turn against Alaktor and decide to commit crimes across the universe for their own gain. The Legion tries to stop them, but in the bodies of their near indestructible friends, this proves to the easier said than done. However, the evil and opportunistic natures of Hitler, Dillinger and Nero get the better of them and all three knock each other out using the weaknesses their stolen super-bodies are vulnerable too. This allows the Legion to gather them up, and restore their friends minds back into their own bodies, return the historical figures to their own times and undo the damage they had done in the 30th Century.

Appearing in "My Son, the Boy of Steel!"Edit

Synopsis for "My Son, the Boy of Steel!"Edit

Superboy’s asking Fred Carter to stand in for him when he has to be elsewhere seems to confirm Amos Carter’s suspicions that his son is really Superboy.

Retrieved from "https://heykidscomics.fandom.com/wiki/Adventure_Comics_Vol_1_314?oldid=1516239"
Community content is available under CC-BY-SA unless otherwise noted.