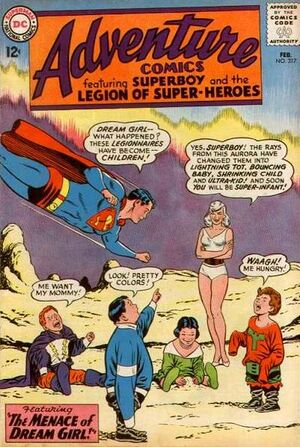 Appearing in "The Menace of Dream Girl!"Edit

Synopsis for "The Menace of Dream Girl!"Edit

While the Legion of Super-Heroes attempts to figure out what the Time Trapper is up too, they find opposition in the way of a barrier protecting the future era in which he resides, keeping the Legion from monitoring his activities.

In the meantime, the Legion induct a new member, Dream Girl, who is voted in because all of the male members of the Legion become instantly attracted to her and vote her into the Legion. Things start to get suspicious, as Dream Girl ends up entrapping various Legion members on disciplinary actions, leading to their temporary suspension from the Legion.

After taking Ultra-Boy, Bouncing Boy, Shrinking Violet, Lightning Lad, and Lightning Lass to an alien world which causes them to de-age into infants (except for Dream Girl who took a preventative antidote) most of the Legion is on suspension.

However, Dream Girl later reveals to Star Boy, that her power is to see the future through dreams, and the reason she has manipulated events is because she forsaw the Legion being killed in a rocket explosion, and that she did everything she could to prevent the Legion members from dieing. Star Boy then reveals to Dream Girl that what she saw was really a planned rocket flight with robot doubles of the Legion. Afterwards, all is explained and Dream Girl decides to leave the Legion to hone her powers, but not before seeing the other Legion members -- restored to their natural ages -- and learning that the episode gave Lightning Lass new powers over density, Dream Girl rechristens her Light Lass.

Appearing in "The Shrinking of Superboy!"Edit

Synopsis for "The Shrinking of Superboy!"Edit

This story is reprinted from Superboy #61.

Retrieved from "https://heykidscomics.fandom.com/wiki/Adventure_Comics_Vol_1_317?oldid=1399446"
Community content is available under CC-BY-SA unless otherwise noted.