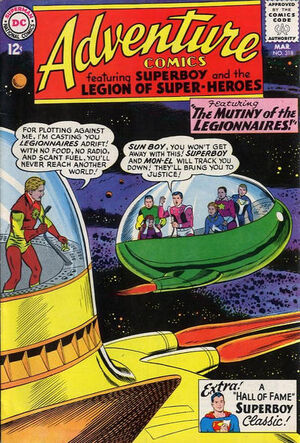 Appearing in "The Mutiny of the Legionnaires!"Edit

Synopsis for "The Mutiny of the Legionnaires!"Edit

While Mon-El and Superboy continue to pierce the "Iron Curtain of Time" that the Time Trapper has put over a future era, Cosmic Boy and Sun-Boy agree to help the population of a dieing world to relocate to a new home world. Recruiting other Legion members (Light Lass, Matter-Eater Lad, Triplicate Girl, Lightning Lad and Star Boy), they load up a giant space craft with the alien race.

Along their voyage in space, the pressure of leadership gets the best of Sun-Boy who begins to strictly reprimand his fellow Legion members. Believing them to all be mutineers, Sun-Boy has the robots controlling the ship force his teammates into an escape ship and crashes it on the doomed planet. The doomed Legion members fight off various threats until they come across an ancient space craft which they cannibalize for spare parts to make their escape ship space worthy. Learning from the Science Police that Sun-Boy never met his destination, the Legion goes into space to search for him.

They eventually find Sun-Boy's ship, and a catatonic Sun-Boy on board. Returning him to Earth and getting him examined by doctors, they realize his behavior was cause from too much time in space. After Sun-Boy is cured, the Legion enact new measures limiting the amount of space missions a Legion member can take for the sake of their health.

Appearing in "The Amazing Adventures of Krypto-Mouse!"Edit

Synopsis for "The Amazing Adventures of Krypto-Mouse!"Edit

Retrieved from "https://heykidscomics.fandom.com/wiki/Adventure_Comics_Vol_1_318?oldid=1399447"
Community content is available under CC-BY-SA unless otherwise noted.