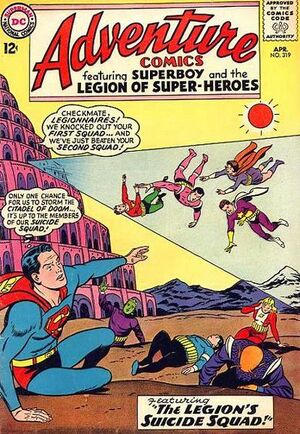 Appearing in "The Legion's Suicide Squad!"Edit

Synopsis for "The Legion's Suicide Squad!"Edit

When the isolationist planet Throon builds a giant tower with a ray that incapacitates passing ships, the Legion of Super-Heroes is sent to try and stop them. The first squad which consists Saturn Girl, Bouncing Boy, Superboy, Lightning Lad, Chameleon Boy, Brainiac 5 and Invisible Kid are dispatched and find themselves easily defeated by devices that are tailor made to deal with their individual threats.

When the remaining members of the Legion all try in their own ways to get past the tower on Throon, they all meet defeat in different ways until all of the members of the Legion have been defeated. Having watched the entire fiasco on their viewing monitor, the Legion of Substitute Heroes goes in for the rescue. While the others keep the defenses of the tower busy, Night Girl uses her strength to burrow through the ground into the main control room of the tower. There she finds that the whole operation is controlled by two crazy old men. Easily defeating them and smashing their machine, Night Girl and the rest of the Substitutes free their Legion counterparts and return to Earth. There a special parade is put on in honor of the Legion of Substitute Heroes, finally giving them the recognition they deserve.

Retrieved from "https://heykidscomics.fandom.com/wiki/Adventure_Comics_Vol_1_319?oldid=1399448"
Community content is available under CC-BY-SA unless otherwise noted.