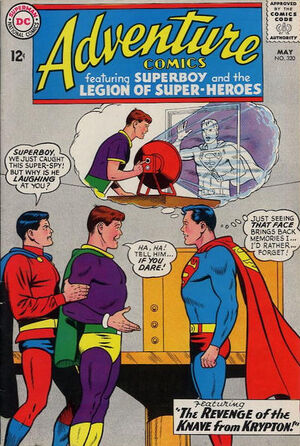 Appearing in "The Revenge of the Knave From Krypton!"Edit

Synopsis for "The Revenge of the Knave From Krypton!"Edit

After finishing his homework, Superboy travels to the 30th Century for his regular visit with the Legion of Super-Heroes. There they are alerted by the security system of an intruder and Superboy is shocked to find it is his old tormentor Dev-Em. Capturing Dev-Em, Superboy explains how Dev-Em was a juvenile delinquent on Krypton who was sentenced to suspended animation, survived Krypton's destruction and was revived on 20th Century Earth. Superboy then recounts about how Dev-Em managed to trap Superboy in the Phantom Zone and pose as him to cause chaos around Earth. After returning from the Phantom Zone, Superboy was unable to stop Dev-Em who escaped into the distant future. Superboy would finish his story by explaining that the only way he was able to clear his name was with the help of his friend Chief Parker who told everyone Red Kryptonite was the "reason" for Superboy's rampage.

However, it is revealed that Dev-Em has turned over a new leaf in the 30th Century and is a member of the Inter-Stellar Counter-Intelligence Corps. However, when reporting back into the I.C.C., Dev-Em has his mission to stop interplanetary criminal Molock to Superboy. Disguising himself as Dev-Em, Superboy manages to bluff Molock with fake Gold Kryptonite, which is actually Proty II in disguise. After Superboy smashes up Molock's operation and turns him over to the police, the Legion offers Dev-Em membership in the Legion, to which Dev-Em declines, preferring to work with the I.C.C.

Appearing in "Superboy's Switch in Time!"Edit

Synopsis for "Superboy's Switch in Time!"Edit

Retrieved from "https://heykidscomics.fandom.com/wiki/Adventure_Comics_Vol_1_320?oldid=1399449"
Community content is available under CC-BY-SA unless otherwise noted.