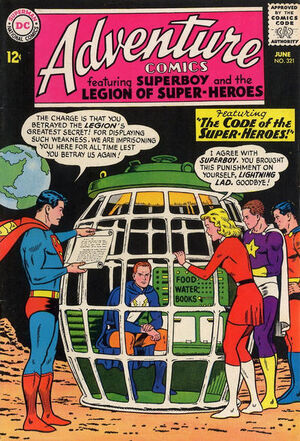 Appearing in "The Code of the Legion"Edit

Synopsis for "The Code of the Legion"Edit

When the Legion intruder alarm goes off, it turns out to be Bouncing Boy, who has just lost his powers due to an accidental exposure to a ray being developed by Element Lad. Instead of expelling him, the Legion decides to keep Bouncing Boy on as a reserve member of the Legion.

However, Lightning Lad confides in his fellow Legionnaires that the information he told the Commissioner was false, and the if the Commissioner was an impostor he would soon be flushed out. Sure enough, the "Commissioner" turns out to be the Time Trapper, and when he realizes the deception he returns behind the Iron Curtain of Time once more. After his defeat, the Legion rescue the real Commander and vow to stop the Time Trapper once and for all. Later, the Legion meets up with their now powerless member Bouncing Boy who introduces them to his new girlfriend, who turns out to be just as fat as he used to be.

Retrieved from "https://heykidscomics.fandom.com/wiki/Adventure_Comics_Vol_1_321?oldid=1399450"
Community content is available under CC-BY-SA unless otherwise noted.