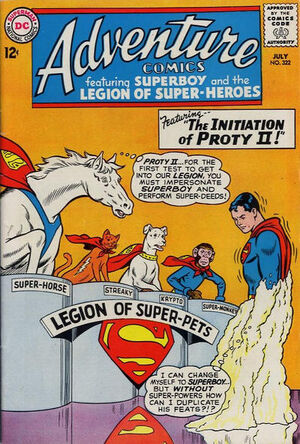 Appearing in "The Super Tests of the Super-Pets!"Edit

Synopsis for "The Super Tests of the Super-Pets!"Edit

While the combined efforts of the Legion of Super-Heroes, and the Legion of Substitute Heroes are busy working on a was to pierce through the Time Trapper's Iron Curtain of Time, the Legion of Super-Pets are gathered together to act should there be any crime while both Legion's are otherwise busy. Proty II decides to apply for the Super-Pets team, and is put through an initiation for membership.

The Super-Pets initially do not believe that Proty has what it takes to be a Superpet and puts him on different "impossible" missions to see if he can be an asset to the group. First Proty manages to collect a sample of Vortum disguised as Superboy, later he helps Saturn girl against a giant eye-ball disguised as Chameleon Boy for the purpose of disguising himself as a member of the Legion without her notice. The third test is keeping the Legion out of their base for one hour, which he succeeds by disguising himself as an automated super-weapon, his final test is to accompany Krypto to explore a mysterious led lined trunk. When the trunk turns out to be full of Kryoptonite, Proty braves the dangers of the deep to bring Krypto to safety.

As a test of his own, Proty disguises himself as Krypto and Krypto as a "dead" Proty to fool the Legion of Super-Pets, but quickly reveals the truth when they fall for it. After this final test, Proty II is officially selected to be part of the Legion of Super Pets.

Retrieved from "https://heykidscomics.fandom.com/wiki/Adventure_Comics_Vol_1_322?oldid=1483287"
Community content is available under CC-BY-SA unless otherwise noted.