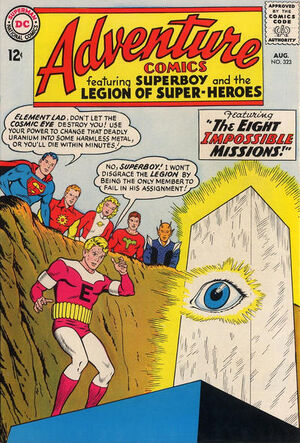 Appearing in "The Eight Impossible Missions"Edit

Synopsis for "The Eight Impossible Missions"Edit

After rejecting another couple of would-be Legionaries, the Legion begins to consider who will be their next leader. Instead of allowing the Legion's computers to compute and select the best possible leader, the Legion decide to let Proty II create a riddle for them to solve, the first Legion member to figure it out the answer would be awarded with leadership.

To start things off, Proty II turns himself into a "Bizarro" Proty complete with sign with his name spelled backwards. Proty would then send select Legion members on various missions that would help solve the riddle. Even with the addition of Superboy's 20th Century friends Pete Ross and Jimmy Olsen, the group are unable to fathom the answer to the riddle.

Finally, Saturn Girl realizes that the answer to the riddle is "Superboy", as the first letter in the code name or last name of each person involved in the riddle spell Superboy's name. The purpose to this riddle being that it's the anniversary of Superboy's induction into the Legion. With the riddle solved, Saturn Girl retains her leadership in the Legion of Super-Heroes.

Appearing in "How Krypto Made History!"Edit

Synopsis for "How Krypto Made History!"Edit

Retrieved from "https://heykidscomics.fandom.com/wiki/Adventure_Comics_Vol_1_323?oldid=1399454"
Community content is available under CC-BY-SA unless otherwise noted.