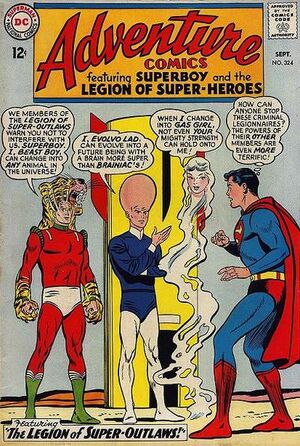 Appearing in "The Legion of Super-Outlaws!"Edit

Synopsis for "The Legion of Super-Outlaws!"Edit

Marden King -- brother deceased Jungle-King a rejected Legion applicant -- is plotting revenge against the Legion over his brothers death. Locating the planet Lallor, he learns that a nuclear explosion on that world had granted five of it's young people with super powers. However, the leader of Lallor, fearing what the young people could do has them exiled from the planet.

Seizing this opportunity, Marden contacts the space-bound Heroes of Lallor and convinces them to go after the Legion of Super-Heroes, whom he convinces the Heroes of Lallor that they are evil. This is all a plot to get a hold of the Legion's clubhouse and the scientific devices therein. While this initially succeeds, both groups of super-teens learn the truth.

Appearing in "The Three Secret Identities of Superboy!"Edit

Synopsis for "The Three Secret Identities of Superboy!"Edit

Retrieved from "https://heykidscomics.fandom.com/wiki/Adventure_Comics_Vol_1_324?oldid=1399453"
Community content is available under CC-BY-SA unless otherwise noted.