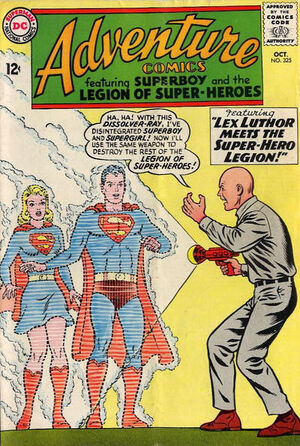 Appearing in "Lex Luthor Meets the Legion of Super-Heroes!"Edit

Synopsis for "Lex Luthor Meets the Legion of Super-Heroes!"Edit

While capturing the criminal brain Arto from the planet Kahnn, Matter-Eater Lad and Triplicate Girl intercept a mysterious space craft. Landing near the Legion club house with the mystery ship, the two Legionaries are shocked to find that it is piloted by Lex Luthor. A Luthor with a full head of hair that claims to be from a time before he became Superboy's arch-nemesis.

Luthor has come to ask the Legion to help him from becoming evil, however the Legion is unaware that this is really the evil Luthor who has come to the 30th Century to defeat Superboy and his allies. Using his disintegration ray (really a Phantom Zone Projector) he manages to fool most of the Legion members and banish them to the Phantom Zone before they can stop him.

However, Luthor does not anticipate that Mon-El spent a long time in the Phantom Zone and is able to subliminally influence Luthor into releasing the Legion. The Legion then swiftly defeat Luthor on live television, and destroy his Phantom Zone gun. The defeated and humiliated Luthor manages escape back to his own time, to plot anew.

Appearing in "The Day Superboy Was a Coward!"Edit

Synopsis for "The Day Superboy Was a Coward!"Edit

Retrieved from "https://heykidscomics.fandom.com/wiki/Adventure_Comics_Vol_1_325?oldid=1399456"
Community content is available under CC-BY-SA unless otherwise noted.