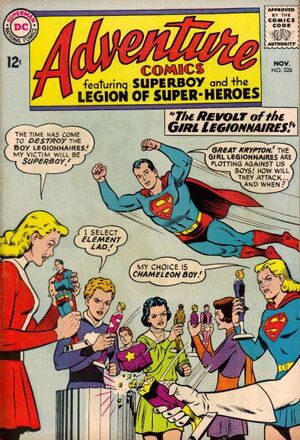 Appearing in "The Revolt of the Girl Legionnaires"Edit

Synopsis for "The Revolt of the Girl Legionnaires"Edit

After all the male Legionnaires are defeated, the girls party, and their command Queen Azura from the planet Femnaz. She explains that after the men on her world were deemed week, she and her people decided to target the male members of the Legion of Super-Heroes believing them to be just as week. She then used special hypnosis devices to convince the female Legion members to join in this cause.

However, the Queen realized the error of her ways when Mon-El and Ultra-Boy saved one of Femnaz's moons, and thus releases the female Legion members from her control. The female members then revive and save their male counterparts and after all is explained, they make peace.

Retrieved from "https://heykidscomics.fandom.com/wiki/Adventure_Comics_Vol_1_326?oldid=1399457"
Community content is available under CC-BY-SA unless otherwise noted.