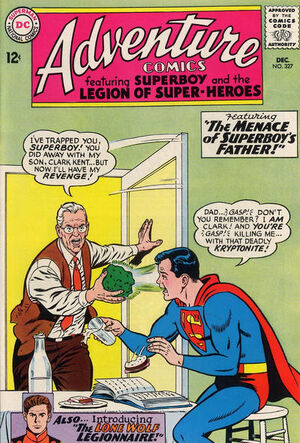 Appearing in "The Lone Wolf Legionnaire!"Edit

Synopsis for "The Lone Wolf Legionnaire!"Edit

While stopping rampaging animals from an interplanetary zoo, Light Lass and Brainiac 5 meet a super-powered teen named Lone Wolf who uses his talents to help them stop the carnage. When they offer him membership in the Legion of Super-Heroes, he declines, stating that he is a lone wolf in practice as well as in name.

When a series of crimes lead the Legion to believe that Lone Wolf is responsible, they try to take him in, in spite of the fact that Light Lass is smitten by him. When they finally catch up with Lone Wolf, they are caught in a dimensional vortex. When they free themselves, Lone Wolf explains to Light Lass that he isn't human before fleeing and the other Legionnaires deduce that he's an android.

Tracing the origins of Lone Wolf to the planet Zoon, they find Brin Londo who explains that Lone Wolf is an android named Karth Arn and is evil. However, the Legion soon realizes that "Brin Londo" is really Karth and after defeating him they learn that Karth usurped Brin Londo's identity (Brin turns out to be Lone Wolf) and framing him for the crimes he's committed. With the truth revealed, Lone Wolf agrees to join the Legion, but hopes find a new name.

Appearing in "The Menace of Superboy's Father"Edit

Synopsis for "The Menace of Superboy's Father"Edit

Retrieved from "https://heykidscomics.fandom.com/wiki/Adventure_Comics_Vol_1_327?oldid=1399458"
Community content is available under CC-BY-SA unless otherwise noted.