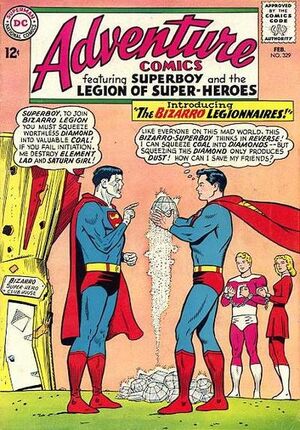 Appearing in "The Bizarro Legionnaires!"Edit

Synopsis for "The Bizarro Legionnaires!"Edit

On Bizarro-World, Bizarro Superboy decides that if he cannot be a part of the Legion of Super-Heroes, then he will make his own Bizarro-Legion. Using his duplicator machine, he creates Bizarro versions of Lightning Lad, Saturn Girl, Invisible Kid, Chameleon Boy, Cosmic Boy, Ultra-Boy, and Mon-El to be his Bizarro-Legion.

As with anything Bizarro, the Bizarro-Legion is a perverted "opposite" version of the actual Legion of Super-Heroes. The group goes out into space and completes missions that are considered good in terms of Bizarro logic, but causes nothing but chaos. When confronted by the real Legion, who demands they disband. Bizarro Superboy decides to agree on one condition: That the real Superboy crush a large diamond into coal. Superboy surprisingly is able to accomplish this feat, and the Bizarro-Legion now "rich" in coal, agrees to disband and return to Bizarro-World. Afterwards when the Legion is confused as to how Superboy was able to turn diamond back into coal, Element Lad reveals that he gave them a helping hand in order to trick the Bizarro's into disbanding their Legion.

Appearing in "The 100 New Feats of Superboy!"Edit

Synopsis for "The 100 New Feats of Superboy!"Edit

Retrieved from "https://heykidscomics.fandom.com/wiki/Adventure_Comics_Vol_1_329?oldid=1399460"
Community content is available under CC-BY-SA unless otherwise noted.