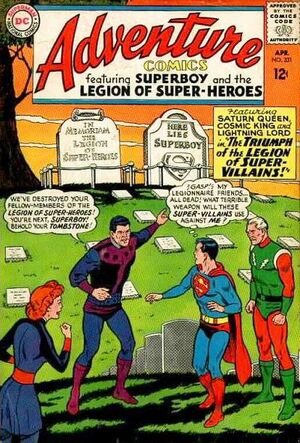 Appearing in "The Triumph of the Legion of Super-Villains!"Edit

Synopsis for "The Triumph of the Legion of Super-Villains!"Edit

While Dynamo-Boy goes to the Pirate Planet, where he takes over after foiling the leaders plot to turn him into a mindless slave, the Legion of Super-Villains decide to take control of the operation. When Dynamo-Boy arrives back on Earth, the Super-Villains have setup false tombstones and tell him that they killed the entire Legion, except Superboy. Using Saturn Queen's hypnosis powers to trick Dynamo-Boy into entering a time machine to escape an illusion of a vengeful Superboy. The ploy works and Dynamo-Boy realizes too late that the time machine is sending him on a one way trip to the year 1 trillion A.D. where he is stranded on a dead world.

Retrieved from "https://heykidscomics.fandom.com/wiki/Adventure_Comics_Vol_1_331?oldid=1399462"
Community content is available under CC-BY-SA unless otherwise noted.