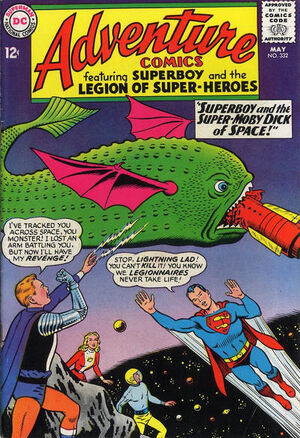 When outer space is terrorized by a giant space monster dubbed the Super-Moby Dick, the Legion of Super-Heroes are unable to stop the beast. During one attempt that trying to stop the creature, one of Lightning Lad's arms is rendered paralyzed by feedback from his own lightning powers. Put under the care of Dr. Lampert, Lightning Lad is given a mechanical exoskeleton over his useless arm to grant it new mobility.

Just when the Legion catches up with Lightning Lad to stop him, they soon see that their comrade is not killing the creature but is succeeding in shrinking it down to size. With the threat neutralized, Lightning Lad informs them all of what he was told. Later, when a repentant Lampert apologizes for being responsible for Lightning Lad's condition, another doctor advises them that they are starting a new arm and leg bank, where they hope to create a replacement arm for Lightning Lad.

Appearing in "The Junior Sleuths of Smallville!"Edit

Synopsis for "The Junior Sleuths of Smallville!"Edit

Retrieved from "https://heykidscomics.fandom.com/wiki/Adventure_Comics_Vol_1_332?oldid=1399463"
Community content is available under CC-BY-SA unless otherwise noted.