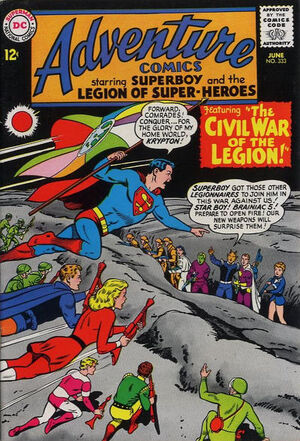 Appearing in "The War Between Krypton and Earth!"Edit

Synopsis for "The War Between Krypton and Earth!"Edit

While on an archeological dig, the Legion of Super-Heroes find an ancient Kryptonian tablet on Earth, which talks of a war between Krypton and Earth. Curious about this previously undiscovered historical moment, the Legion decides to travel back in time to find out the real story. One group (Superboy, Saturn Girl, Lightning Lad, Colossal Boy and and Element Lad) travel to ancient Krypton, while another (Brainiac 5, Star Boy, Light Lass, Chameleon Boy, and and Phantom Girl) travel to prehistoric Earth.

On Krypton, the Legionaries meet Zat-El, and a group of Kryptonians that are tired with the constant persecution of scientists on their world. Fed up with the stagnation of their planets advancement they are building a rocket to leave the planet, a plan that the Legion agrees to help them with, and load the ship with various creatures from Krypton (which turn out to be the ancient dinosaurs.)
Meanwhile, the Legion members on Earth find that the planet has been colonized by aliens from the planet Vrunn who have built a colony called Atlantis. When both group of Legionnaires are reunited, the come to blows about who has the right to colonize the Earth. However during their "civil war", Brainiac 5 realizes that the xenon in Earth's atmosphere will eventually prove fatal to the Atlantians.

Realizing that both colonies could live on Earth, Brainaic 5 comes up with a solution: changing the Atlantian's into amphibians and sinking their colony into the ocean, both colonies could then live on Earth together in peace. Returning to their own time, Superboy -- curious of the fate of the lost colony of Krypton finds the a hidden cavern belonging to the Colony burried in the 20th Century, where he learns that the colonizers lost control of the lizards they brought with them and they were all killed off trying to tame the beasts.

Appearing in "The Spoiled Superboy!"Edit

Synopsis for "The Spoiled Superboy!"Edit

Retrieved from "https://heykidscomics.fandom.com/wiki/Adventure_Comics_Vol_1_333?oldid=1399464"
Community content is available under CC-BY-SA unless otherwise noted.