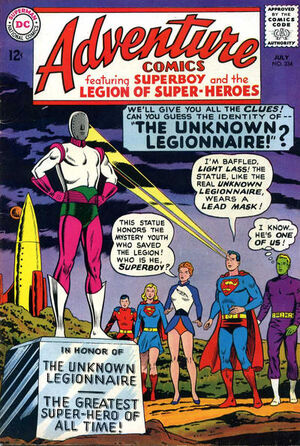 Appearing in "The Unknown Legionnaire"Edit

Synopsis for "The Unknown Legionnaire"Edit

While visiting Proty II's home world, the Legion see that they have constructed a statue commemorating the "Unknown Legionnaire", and reminisce on the mission that let to the creation of this commemorative statue.

When the criminal scientist Norm Eldor escaped from prison, Supergirl is sent out to secretly track him down. The Legion suddenly finds themselves being attacked by Protian doppelgangers under the employ of Elder. However, with the aid of a spray that would reveal Protian impostors, and the aid of the arrival of a lead clad hero, who is dubbed Unknown Boy to aid them, the Legion are able to defeat the criminal Proteans and capture Eldor.

After the mission is complete, Superboy deduces that "Unknown Boy" is really a disguised Supergirl. With her memory restored Supergirl informs the others that she was exposed to Red Kryptonite which caused her to struck with amnesia, and gave her the ability to use her x-ray vision through lead. Still remembering her mission and determined to keep her identity secret, Supergirl created the "Unknown Boy" armor to complete her mission.

Retrieved from "https://heykidscomics.fandom.com/wiki/Adventure_Comics_Vol_1_334?oldid=1399465"
Community content is available under CC-BY-SA unless otherwise noted.