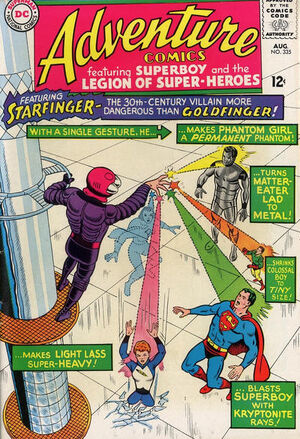 After visiting Lightning Lad at the hospital where he is having his arm looked at by Dr. Lars Hanscom, the Legion go to protect a prospector who has discovered an element dubbed Rejuvium, which has great healing properties. This element is targeted by a new costumed criminal called Starfinger, who the Legion just barely manage to stop from stealing the Rejuvium.

When this plot fails, Starfinger announces that he is going to target the seven wonders of the 30th Century one-by-one until the Rejuvium is turned over to him. The Legion tries to stop Starfinger at the first attack against a city that circles around the Earth, Star Boy is gravely wounded and has to be taken to a nearby star by Mon-El in order to heal.

When Starfinger attacks the next wonder, the Stratosphere Laboratory, the Legion once more fails to stop Starfinger, who manages to escape. However, before he can make his escape, Saturn Girl is able to read Starfinger's mind and learn that he is a member of the Legion of Super-Heroes. This story is continued next issue...

Retrieved from "https://heykidscomics.fandom.com/wiki/Adventure_Comics_Vol_1_335?oldid=1399466"
Community content is available under CC-BY-SA unless otherwise noted.