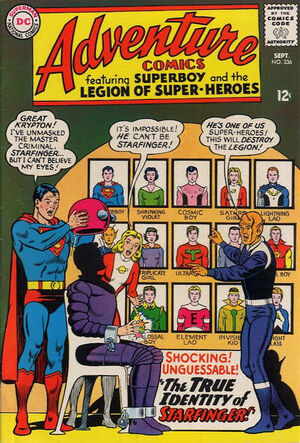 Appearing in "The True Identity of Starfinger!"Edit

Synopsis for "The True Identity of Starfinger!"Edit

Continued from last issue... The Legion of Super-Heroes have all been revived and healed by Brainiac 5 and are resuming their mission to stop Starfinger from destroying the seven wonders of the world in order to pressure the United Planets into surrendering the Rejuvium.

After the Legion attempt to stop Starfinger from destroying a tunnel through the Earth, and statues of some of histories most famous people, the Legion succeed in stopping him from destroying the a Fusion-Powersphere with a the help of shields that protect them from Starfinger's ray blasts.

Finally capturing Starfinger, they unmask him and is revealed to be Lightning Lad, however Saturn Girl detects that he was responding to hypnotic commands. Freeing Lightning Lad from it's control, he tells them that he is was under the control of Dr. Hascomb, his doctor who was trying to collect the Rejuvium for his own ends.

Tracking the Hascomb to his hide out which turns out to be within the Fusion-Powersphere, Hascomb has managed to force the United Planets to hand over the rejuvium. However, battling Superboy in his own Starfinger armor, Hascomb is easily defeated and turned over to the police, and the Legion turns over the Rejuvium to the United Planets for further study.

Appearing in "The Sixth Clark Kent!"Edit

Synopsis for "The Sixth Clark Kent!"Edit

Retrieved from "https://heykidscomics.fandom.com/wiki/Adventure_Comics_Vol_1_336?oldid=1399467"
Community content is available under CC-BY-SA unless otherwise noted.