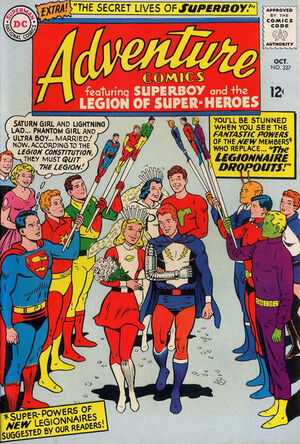 Appearing in "The Weddings That Wrecked the Legion"Edit

Synopsis for "The Weddings That Wrecked the Legion"Edit

After the Legion of Super-Heroes appoints Brainiac 5 as the new leader of the Legion, he learns of an impending alien invasion and believes that their Plan-R would be required to stop the invasion. When Brainiac 5 becomes leery of the romances of Phantom Girl to Ultra Boy, and Saturn Girl to Lightning Lad.

In response to Brainiac 5's demands that the cease their romantic relationships, the four Legion members instead get married and quit the Legion. Learning of this, the alien invaders send three of their operatives as three potential Legion recruits: Size Lad, Blackout Boy and Magnetic Kid, to infiltrate the Legion and learn what Plan-R is.

They manage to infiltrate the Legion long enough to steal the book which has the details of Plan-R and take it back to their home planet to be decipher. In cracking the code, they learn that Plan-R is to create super power pills. However the Legion, reunited with their "married" members (which was all part of an elaborate hoax to force the invaders hands) who stop the aliens plot.

After returning home, the Legion members who were "married" reflect on the experience and hope that someday they can really get married.

Appearing in "The Secret Lives of Superbaby"Edit

Synopsis for "The Secret Lives of Superbaby"Edit

Retrieved from "https://heykidscomics.fandom.com/wiki/Adventure_Comics_Vol_1_337?oldid=1399468"
Community content is available under CC-BY-SA unless otherwise noted.