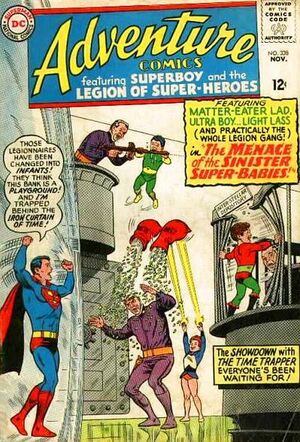 Now that the Legionnaires have devolved into young children, vanquishing them will be as easy as stealing candy from a baby!

Appearing in "The Menace of the Sinister Super-Babies!"Edit

Synopsis for "The Menace of the Sinister Super-Babies!"Edit

Having invented an hour glass that can devolve people to their earliest stage of life, the Time Trapper sends his agent Glorith of Baaldur to the 30th Century to use it against his enemies the Legion of Super-Heroes.

Manipulating the Legion into coming to her, Glorith uses the hour glass in an attempt to use it against the Legion. However, things don't go exactly as planned because the hour glass only devolves the present Legion members to the age of infancy due to interference from a nearby chemical fountain. After trapping Superboy and Brainiac 5 in his own time, Time Trapper travels to the 30th Century to take control of the operation. After tricking the young and impressionable Legion of Super-Babies, the Time Trapper betrays Glorith using the hour glass against her.

Taking the Legion to another world to finish off the job that Glorith started for him, Time Trapper under estimates the children's mannerisms, and when they turn his ship into candy, they also turn the device he uses to control his Iron Curtain of Time into candy as well, allowing Superboy and Brainiac 5 to return to the 30th Century. The two bargain with the Time Trapper, that upon changing their fellow Legion members to their correct age, he would be allowed to escape in his ship.

However, after restoring the Legion members to normal, the Time Trapper soon finds himself trapped thanks to a barrier ring that was planet on the ship by the Legion.

Retrieved from "https://heykidscomics.fandom.com/wiki/Adventure_Comics_Vol_1_338?oldid=1399469"
Community content is available under CC-BY-SA unless otherwise noted.