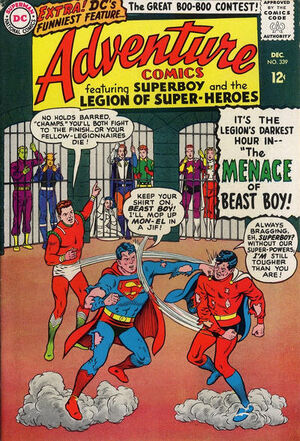 Appearing in "Hunters of the Super-Beasts"Edit

Synopsis for "Hunters of the Super-Beasts"Edit

When animals on the planet Vorm seemingly develop an intelligence, the Legion of Super-Heroes is called in to investigate what's going on. They soon deduce that the only super-being they know that would have this capability is Beast Boy one of the Heroes of Lallor. Traveling to that planet, Superboy learns from the Heroes of Lallor that Beast Boy left their world after he became an outcast and a loner due to his treatment by the people of Lallor.

While on Vorm, the Legion tracks down Beast Boy, who tries to escape them by disguising himself as a beast and allowing himself to be captured. However the Legion learns of this and track him to where he is shipped: The Metropolois Zoo. There they try to find Beast Boy, who tricks them with illusions before ultimatly breaking himself and all the other creatures free. Disguising himself as a dog, Beast Boy befriends a little girl and sacrifices his life to save her from the Maw, a creature which Beast Boy was responsible for freeing. The Legion finds Beast Boy just as his body resumed it's human form, and mourn him for the hero he was in the end.

Appearing in "The Night of March 31st!"Edit

Synopsis for "The Night of March 31st!"Edit

This story is reprinted from Superman #145.

Retrieved from "https://heykidscomics.fandom.com/wiki/Adventure_Comics_Vol_1_339?oldid=1399470"
Community content is available under CC-BY-SA unless otherwise noted.