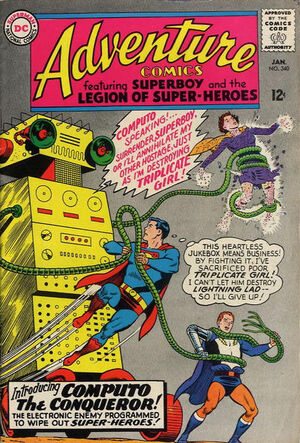 Appearing in "Computo the Conqueror!"Edit

Synopsis for "Computo the Conqueror!"Edit

While building the world's most intelligent mobile robot, dubbed Computo, Brainiac 5 soon finds trouble when the device takes him prisoner and absorbs his vast knowledge. Computo then builds an army of similar robots to seek out the worlds most intelligent people to absorb their intelligence as well. While the robots rampage through Metropolis, the Legion of Super-Heroes is called in to try and stop the robots.

When Ultra-Boy and Superboy try and stop one of the Computo drones, Computo reacts by having it self destruct killing the scientist inside, and warns the Legion against further attempts to stop him. Computo then ejects Brainaic 5 from his body and reconfigures himself into a new form. When the Legion returns to their base, they find that it has been rigged by Computo to be a giant robot itself, complete with a power nullifying device inside. However, the Legion manage to block it's rays long enough for Superboy to regain his powers and rip an opening in their base so that they can escape.

Waiting there for them is Computo and it's army, who begin to capture each member of the Legion. During the attack one of Triplicate Girl's copies is killed, and Superboy, Ultra-Boy and Mon-El manage to escape capture.

Appearing in "The Mystery of the Space Trophies"Edit

Synopsis for "The Mystery of the Space Trophies"Edit

Retrieved from "https://heykidscomics.fandom.com/wiki/Adventure_Comics_Vol_1_340?oldid=1399471"
Community content is available under CC-BY-SA unless otherwise noted.