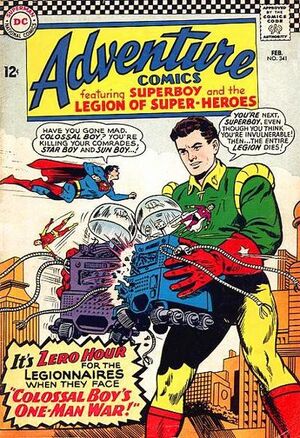 Me politely interrupt your monotonous mouthings to show how marvelous me can compute! Uh... One plus one equals... uh... uh! Er... Forget it!

Story continued from last issue... With most of the Legion captured, the remaining members of the Legion of Super-Heroes hold a funeral for the deceased Triplicate Girl. However, when two of her copies show up alive and well, they realize that it was only a copy of her that was killed. The two survivors are rechristened Duo Damsel and the group begins thinking of a way to try and destroy Computo and it's army.

Their first attempt is to distract Computo with the "Weirdo Legionnaire" (really Proty II in disguise) while Colossal Boy smashes the robots holding the other Legion members captive. With their friends free (except Saturn Girl), the Legion manages to escape into the ancient Batcave to get a brief respite and try to find a new way to defeat Computo. Howver, Computo is able to track them there as well, and threatens to destroy Saturn Girl if they do not surrender.)
The Legion tries to save her with a duplicator ray which creature a Bizarro-Computo, however this turns out to be a dud and it is destroyed by Computo.

In a final effort to stop Computo, the Legion gets a brief assist by Bouncing Boy who uses a gas that briefly restores his powers. This give Brainiac 5 time enough to build an anti-mater weapon to destroy Computo and his robots, and the Legion rescues Saturn Girl.

Retrieved from "https://heykidscomics.fandom.com/wiki/Adventure_Comics_Vol_1_341?oldid=1399472"
Community content is available under CC-BY-SA unless otherwise noted.