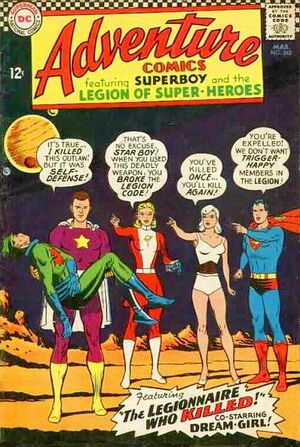 Star Boy, the Legion has judged... and by a majority has found you guilty of breaking the code! You are hereby officially expelled from the Legion of Super-Heroes!

Appearing in "The Legionnaire Who Killed!"Edit

Synopsis for "The Legionnaire Who Killed!"Edit

While going to visit his folks on the distant planet of Karak, Star Boy finds that they have already left, and that their observatory has been left in the care of Dr. Jan Barath. Shortly after his arrival, an alien named Kenz Nuhor of Naltor, the home planet of Dream Girl. Kenz kills Barath and attacks Star Boy, seeking to kill him because Dream Girl loves Star Boy instead of him. With his powers reflected back on him, Star Boy is forced to kill his attacker with a ray gun in self defense when the arrival of Dream Girl distracts Kenz. After the incident, Dream Girl's testimony clears Star Boy of any wrong doing with the Science Police.

However, things do not fare so well when Star Boy returns to the Legion of Super-Heroes club house. As he had violated their no-killing rule, forbidding any Legion member from killing, the Legion decides to put it to a vote to determine if Star Boy's Legion membership should be revoked. Superboy agrees to defend Star Boy, and begins to search for video evidence where another Legion member is forced to kill in self defense. However, all his the footage, and an attempt to have Proty II (in the form of a killer beast) to attack the court proceedings to see if any of the Legion members would be forced to kill, fail to create a precedence in Star Boy's case.

Appearing in "The Boy Who Betrayed Clark Kent!"Edit

Synopsis for "The Boy Who Betrayed Clark Kent!"Edit

Retrieved from "https://heykidscomics.fandom.com/wiki/Adventure_Comics_Vol_1_342?oldid=1399473"
Community content is available under CC-BY-SA unless otherwise noted.