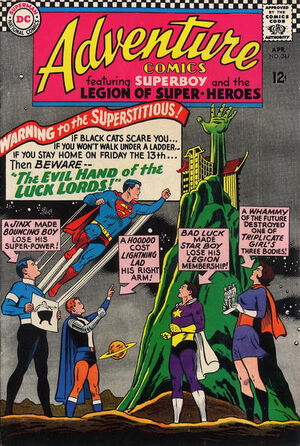 Our so-called Legion Jinx is ended... but these four, who have broken interplanetary law by blackmailing this world, will find their bad luck is just beginning!

Appearing in "The Evil Hand of the Luck Lords"Edit

Synopsis for "The Evil Hand of the Luck Lords"Edit

After a series of instances of breaking taboos, and the admission of recent misfortunes from fellow members; Lightning Lord, Bouncing Boy and Star Boy, the Legion believe they might be jinxed. This belief is further amplified when Shrinking Violet and Invisible Kid's powers begin to malfunction.

Saturn Girl decides to investigate this bout of bad luck, believing it's caused by outside forces. Her investigations lead her to the planet Thraun, a place who's people experience nothing but good luck. When her ship is destroyed in space, the Legion go to the planet thinking she too has been struck down by bad luck.

On Thraun, they meet the Luck Lords, and learn that they have Saturn Girl hostage. With the help of the Legion of Super-Pets, they are able to defeat the Luck Lords and turn them over to the Science Police. It is revealed that the Lords were really evil scientists who were using technology (and hypnotism) to strike the Legion down.

Clark Kent’s best friend Pete Ross accidentally learns that Clark is Superboy while with him on a camping trip. But Superboy does not know that Pete Ross knows his double identity, and Pete vows to secretly help him fight crime and keep his anonymity.

Retrieved from "https://heykidscomics.fandom.com/wiki/Adventure_Comics_Vol_1_343?oldid=1399474"
Community content is available under CC-BY-SA unless otherwise noted.