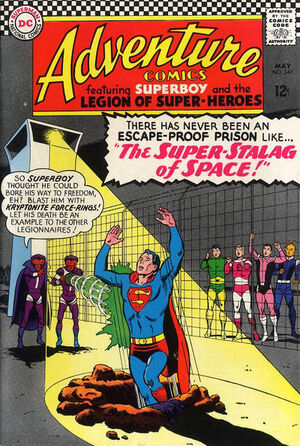 I was in the conditioning room for questioning... but I resisted Nardo's brainwashing, and I didn't sing! It proves one of us is a traitor a stool pigeon who told Nardo I was the escape officer!

When the Legion of Super-Heroes discover that Brainiac 5 has been captured on a prison asteroid, they try to save their friend. However, their ship is blasted out of the sky and the Legion are also taken as prisoners.

As prisoners, they meet several other super-beings that have been captured, including a shape-changer from the planet Durla who came to rescue his friends, but instead was caught and "froze" in the form of Superboy. When the false Superboy tries to escape the next day, Nardo -- the warden -- and his men kill him.

However, this doesn't stop the Legion from trying to plot an escape themselves. When Nardo and his men learn that Brainaic 5 is masterminding an escape, they torture him in the "conditioning room." Brainiac 5 resists their probes and is allowed to leave, but he now believes that there is a traitor in their group (he is correct).

The Legion try another escape attempt, this time Matter-Eater Lad and Blockade Boy manage to escape. They discover that all the female members of the Legion are imprisoned at an all-female camp, but they are soon discovered by Nardo and his men, who fires a destructive nuclear force at them.

Appearing in "The Millionaire Pupil"Edit

Synopsis for "The Millionaire Pupil"Edit

Retrieved from "https://heykidscomics.fandom.com/wiki/Adventure_Comics_Vol_1_344?oldid=1516588"
Community content is available under CC-BY-SA unless otherwise noted.