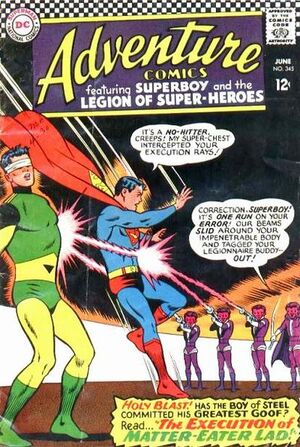 Boys, get a load of this! I've got the goods on the stool pigeon who's been chirping to Narro!

Appearing in "The Execution of Matter-Eater Lad!"Edit

Synopsis for "The Execution of Matter-Eater Lad!"Edit

When Weight Wizard is exposed as a traitor the Legion berates him, however having a change of heart, Weight Wizard tries to escape and is killed by some of the plants that are outside the prison. Each attempt to break out is once more thwarted, with Invisible Kid being shrunk down to miniature size in one attempt, and narrowly escaping with his life.

Next, the female members of the Legion try to make an escape, with Light Lass using her weight powers to lighten the fence and another where Duo Damsel duplicates herself and shines the giant searchlight to lure the native beasts to attack the boy's prison. The stampede works, and the male Legion members revolt and go for a mass jailbreak. Their success is insured with the arrival of Superboy, Mon-El and Ultra Boy, who help bust up Nardo and his minions, and save Matter-Eater Lad from execution, but not from being grazed by the ray blast meant to kill him. Matter-Eater Lad does survive, but finds that the ray has changed his body composition to resemble that of Bouncing Boy's old powers.

Retrieved from "https://heykidscomics.fandom.com/wiki/Adventure_Comics_Vol_1_345?oldid=1516589"
Community content is available under CC-BY-SA unless otherwise noted.