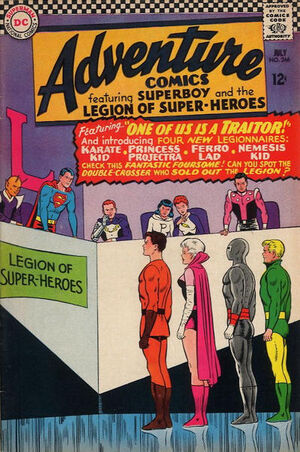 Even though Karate Kid bit off more than he could chew, anyone who can give ME that kind of tussle belongs in the Legion!

Appearing in "One of Us is a Traitor!"Edit

Synopsis for "One of Us is a Traitor!"Edit

Superboy presides over a Legion meeting as four candidates for membership appear to demonstrate their powers. They are Princess Projectra of the planet Orando, who can project illusions; Nemesis Kid from Myar, the alchemists' planet, whose body develops the powers needed to defeat any single opponent; Ferro Lad of Earth, a mutant who can turn into virtually indestructible iron; and Karate Kid, also of Earth, who possesses great skill in all forms of fighting especially karate and judo. He demonstrates by fighting Superboy to a near-draw. After the four new members are sworn in, Superboy rolls a film of a planet in a hitherto unknown galaxy, inhabited by a civilization possessing many advanced ships and military weapons. Suddenly, the face of Garlak, Warlord of Khund, the planet they had been discussing, appears on their screen. He threatens to attack and destroy Earth in one hour unless it surrenders to him. Superboy tells his comrades of three electro-towers he recently helped erect, located at Alaska, Ceylon, and Tierra del Fuego. These towers can repel any attack, but Superboy fears they might be sabotaged by spies, and so splits the Legion into teams to guard each tower. Meanwhile, in his flagship, Garlak gloats that they spy they fear is in their own ranks.

At the Alaskan tower, Cosmic Boy, Phantom Girl, and Karate Kid are suddenly overwhelmed by a loud blast. Cosmic Boy investigates, while Phantom Girl checks out a spacecraft flying within their restricted zone. The craft proves to be booby-trapped, and she barely escapes with Cosmic Boy's assistance. She casts suspicion upon Karate Kid for all this, and the two return to the tower to find it destroyed, and Karate Kid and the tower's commander unconscious. Circumstancial evidence points to Karate Kid as the culprit, and Phantom Girl's suspicions are increased.
This story is continued next issue...

Retrieved from "https://heykidscomics.fandom.com/wiki/Adventure_Comics_Vol_1_346?oldid=1399477"
Community content is available under CC-BY-SA unless otherwise noted.