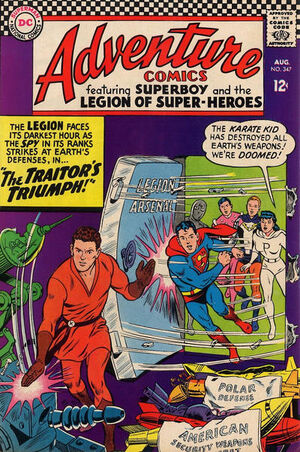 Appearing in "The Traitor's Triumph"Edit

Synopsis for "The Traitor's Triumph"Edit

While defending the additional towers from destruction by the forces of Warlord Garlak, the Legion sees Karate Kid, inside the Legion Clubhouse, destroying an arsenal of weapons.

The Legion confronts Karate Kid over their discovery. Outside, Nemesis Kid listens in and believes that they have discovered that he is the traitor. He then admits his alliance to Garlak. The Legion manages to defeat Nemesis Kid and stop the invasion of Garlak and his warriors. However, after Garlak's defeat, Nemesis Kid manages to escape by teleporting away.

Retrieved from "https://heykidscomics.fandom.com/wiki/Adventure_Comics_Vol_1_347?oldid=1399478"
Community content is available under CC-BY-SA unless otherwise noted.