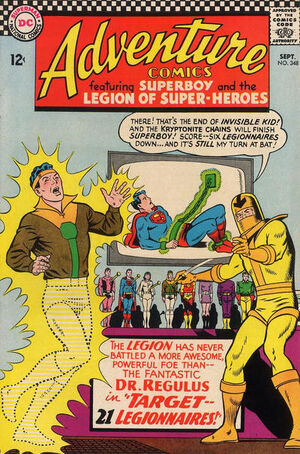 When the Legion elects Invisible Kid as their new leader, they go to participate in a parade. However, the event is marred when Sun Boy is stricken with amnesia and flees the others.

When their club house and a Tevis Building are stolen by the costumed criminal Dr. Regulus, the Legion go after him and in the insuring clash they are over powered by the various traps and weapons Regulus has setup to try and destroy them. However, this plan backfires when the restored Sun-Boy arrives and saves his friends.

With Regulus defeated and escaped, the Legion restores everything to normal, and Regulus -- safe in his secret hideout, vows to get his revenge against the Legion of Super-Heroes.

Retrieved from "https://heykidscomics.fandom.com/wiki/Adventure_Comics_Vol_1_348?oldid=1399479"
Community content is available under CC-BY-SA unless otherwise noted.