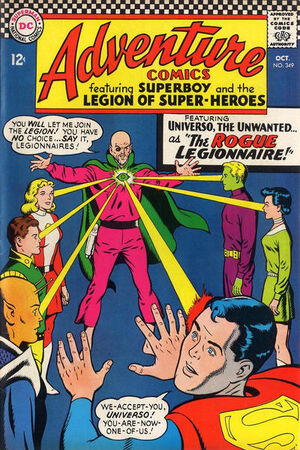 Appearing in "The Rogue Legionnaire"Edit

Synopsis for "The Rogue Legionnaire"Edit

The Legion of Super-Heroes have selected members to judge at the Metropolis Students' Science Fair. There, Superboy, Brainiac 5, Saturn Girl, Shrinking Violet, and Colossal Boy judge the winner to be Rond Vidar a young boy who has invented a collapsible Time Cube. While the award is being given out, Brainiac 5's alarm-receiver alerts the Legion of trouble back at their Club House and depart to investigate.

There they are joined by Chameleon Boy, and they are shocked to find their base broken into by a villain named Universo. Universo, manages to use his super-hypnosis powers to hypnotize all the present Legion members, including Superboy due to the power's Kryptonite base. The only one able to resist the hypnosis is Brainiac 5 who flees from his own friends to avoid capture. Brainiac 5 attempts to stop Universo, however the villain escapes in one of the Legion's Time Bubbles, and destroys the other so that none of the Legionnaires can go after him. With Universo gone, those under his hypnotic sway revert to normal except for Superboy who is rendered incapacitated by a post-hypnotic suggestion that was meant to keep the Boy of Steel out of action.

With the repair of their damaged Time Bubble possibly taking weeks to repair the Legion begins considering alternatives when they are contacted by Professor Huxton. Unknown to the Legion, Huxton is under the hypnotic command of Universo, and tells them that there were multiple disturbances in the past: Peru in the year 1300, China in 1280, England in 693, France in the year 1812, and finally ancient Egypt circa 1243 B.C.

Remembering Rond Vidar's time machine, the Legionnaires rush over to the science fair to ask to use it to stop Universo. There Rond warns the group that his device is much more limited than the Legion's Time Bubbles as anyone who is sent into the past must be returned within 24 hours or risk being stranded in the past. Accepting the risks, each Legion member is transported to one of the effected points in history.

Chameleon Boy appears in Peru during the year 1300, there he would witness a thief attempting to drop a large rock on a caravan. Using his chameleon powers to save the caravan the people who witness it begin to worship him as an Incan god. Chameleon Boy uses this as a means to better get around and try and learn what Universo has been up to in this time. Taken to the leader of this Peruvian kingdom, Chameleon Boy soon learns that their king has been hypnotized by Universo. Wanting to prove that Chameleon Boy is not an Incan god, he has the Legionnaire tossed into a volcano. Chameleon Boy's powers allow himself to escape sudden death, however the ruler then pounces on Chameleon Boy threatening to pitch them both into the firey lava below.

The other Legion members find peril in the other times as well as they too end up stumbling into the traps laid by Universo: Shrinking Violet arrives in ancient Egypt and is chased by Egyptian soldiers and although her shrinking powers and flight ring allow her to make an escape, the guards hawks give her merry chase until she is knocked into the path of the crushing hoofs of a horse. Colossal Boy finds himself in England circa 693 A.D. where he is attacked by the king's army. Although Colossal Boy has superior size, he is outnumbered by the sheer number of soldiers and is knocked off a cliff by a rock shot from a catapult. Saturn Girl meanwhile is forced into being a servant girl by Universo's thrall station in France in the year 1812. There he frames her for being a spy right in front of Napoleon Bonaparte who orders his troops to execute her. While her mental powers prevent from being shot by Napoleon's guards, Universo's agent manages to fire off a shot from the laser weapon that was left with him. Brainiac 5 fares no better in China circa 1280 A.D. where he finds himself the prisoner of Kublai Khan where he is viewed as a demon and is tied to a gong to be executed. Although he manages to escape he also seemingly meets his end at the hands of a mechanical dragon provided by Universo.

Back in the 31st Century, Universo has returned to use his hypnotic powers to take control of the United Planets Council in a bid to take over the universe, his true goal the whole time. However, when Universo attempts to hypnotize them he learns that it's not the UPC members, but the Legion of Super-Heroes. Shocked to find the Legion members still alive, Universo is told that they were pulled out deaths path by Ronds, who while monitoring their time trips, would pull them back to the present before harm could befall them. With Universo taken away, the Legion thanks Rond for his help only to be delivered a shock: Universo is Ronds' father.

As the boy walks off in shame lamenting over his divided loyalties to his father and the Legion, the Legion uses Universo's hypnotic device to restore Superboy to normal.

Retrieved from "https://heykidscomics.fandom.com/wiki/Adventure_Comics_Vol_1_349?oldid=1399480"
Community content is available under CC-BY-SA unless otherwise noted.