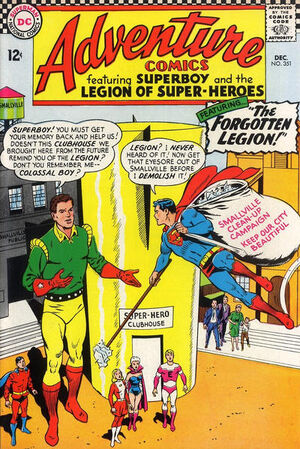 Popping planets! The Hag turned into a gorgeous girl!

Appearing in "The Forgotten Legion"Edit

Synopsis for "The Forgotten Legion"Edit

With R.J Brande, the richest man in the universe (and the Legion's financial backer) being robbed, Invisible Kid sends off Cosmic Boy, Ferro Lad, Matter-Eater Lad and mysterious Legion inductee Miss Terious off to stop the crime in progress. Suspicious of their new members Miss Terious and Sir Prize, Mon-El convinces Ultra Boy to use his ultra vision to try and see Sir Prize's true identity under his lead armor. As this goes against Superboy and Supergirl's instructions, Invisible Kid is forced to strike his comrade to get him to stop before it's too late. Invisible Kid then explains how the two mystery members were inducted into the group under good faith of Superboy and Supergirl, who were forced to give up their Legion membership and erase all their memories of the 30th Century when a cloud of special Kryptonite enveloped the Earth and would remain for the next two years. One of the conditions of this situation was that the Legion would promise Superboy and Supergirl keep the identities of the two new members secret.

Meanwhile, out in space, the other Legion members are approaching the home world of R.J. Brande and find that whomever is attacking it has turned it's planetary defenses to prevent anyone from stopping their spectacular crime. The Legion's ship is destroyed by sentinel satellites forcing them to go out into space in person to fight their way through. After Cosmic Boy uses his magnetic powers to send the satellites away they are next attacked by prison robots who encase them in a cage. They manage to escape when Matter-Eater Lad chews through the cage so that they can escape.

On the home planet of Evillo, Lightning Lad wakes up and is offered membership in the tyrants group, the Devil's Dozen. Lightning Lad refuses to join the group and Evillo forces him to inhale a gas that seemingly makes the lad fall under his control. However, when Evillo begins preparations to have Lightning Lad's robotic arm repaired, the young Legionary reveals that he managed to fight off the gasses effects and lands a solid punch. Pulling away Evillo's weapon, Lightning Lad uses it on his foe to learn to his dismay that it is really an Energizer weapon that causes Evillo to grow energy firing horns that the villain uses to disarm his prisoner.

While back on the planet of R.J. Brande, the Legion members are met by the evil sorceress Hag who materializes a series of pictures depicting the fates of the Legion members present. When Ferro Lad quickly uncovers his he learns that he might meet death by fire. Miss Terious reveals hers to learn that she will be fine, but stops Cosmic Boy and Matter-Eater Lad from revealing theirs suggesting instead that they counteract the black magic spell with a white magic one instead. She recalls they require molten lead and iron as well as the lock of a magicians hair and the print of an enchanted shoe. Realizing that they need to use more resources Cosmic Boy calls in to headquarters and asks for the entire Legion's help.

The only other Legion members available are Mon-El, Saturn Girl, Element Lad, Colossal Boy and Princess Projecta. The group decides to call in some extra help from the Legion of Substitute Heroes, who agree to help them get the lock of hair they need from Superman's nemesis Mr. Mxyzptlk. Deciding to travel into the past and get Superboy's help, the Legion travel back in time to Superboy's era in a Time Bubble leaving the de-powered Bouncing Boy behind to guard the Club House.

There they find that Superboy is in his civilian identity of Clark Kent and is currently attending class. The cause a distraction by having Colossal Boy grow to gigantic size and have Princess Projecta cast an illusion of the Legion Clubhouse so as to draw a crowd from within the school. Clark, still unable to remember the Legion thanks to the Kryptonite capsule implanted in his brain investigates as Superboy. When the Boy of Steel fails to recognize his fellow Legionaries he is about to leave on a clean-up mission of Smallville when Element Lad uses his powers to change the Kryptonite capsule into a harmless element. With Superboy's memory restored to normal, the Boy of Steel agrees to help the Legion travel to the 5th Dimension and get a lock of Mr. Mxyzptlk's hair.

Superboy and Mon-El then travel to the 5th Dimension where they attempt they are welcomed by Mxyzptlk to try and cut his hair. However, the two heroes find that Mxyzptlk is toying with them by changing his hair into steel. Not in the mood for games, Mon-El uses his heat vision to burn off the hair and the two heroes flee the 5th Dimension while a now bald Mxyzptlk vows to get revenge on both of them. With the hair of a magician obtained, the Legion then turns Superboy's Kryptonite capsule back to normal and return to the 30th Century.

Back in their own time the Metropolis reservoir is threatened to be drunk by Sugyn when he is confronted by the powerless Bouncing Boy. The powerless Legionary is easily defeated and taken back to Prince Evillo. Evillo is furious at Sugyn for capturing a powerless member of the super-group and banishes him to the Realm of Darkness.

Returning to the 30th Century the two groups meet with the others and complete the potion when they are confronted once more by the Hag. With the white magic spell cast, the Hag is turned back White Witch, who reveals herself to be Dream Girl's sister. Mis Terious and Sir Prize also reveal themselves to be Dream Girl and Sun Boy. With the two's identities revealed they fear that they will now once more have to leave the Legion, however Invisible Kid concedes and allows them to rejoin the group.

When the Legion members go to the planet Tartarus to rescue Lightning Lad and Bouncing Boy, Evillo reveals that the two have been restored and put under his control by his slave Dr. Zan Orbal. However, much to Evillo's surprise, Orbal has betrayed Evillo and not only restored Lightning Lad's damaged arm to normal, but also restored Bouncing Boy's powers. The group then clash against Evillo, his minions and the remaining members of the Devil's Dozen. The group then easily defeats Evillo and his minions. After the battle Orbal reveals the reason why he betrayed Evillo: Evillo's love of experimenting on people left Orbal with a hideously deformed face that no other doctor could restore.

With their mission over, the group returns to their Clubhouse where they celebrate the restoration of Lightning Lad and Bouncing Boy and welcome Dream Girl and Star Boy back into the group. As an added surprise, the group is shocked to find that both Superboy and Supergirl have returned. When they inquire as to how they are able to exist in the 30th Century with the Kryptonite cloud around the Earth, the two Kryptonians show them that the Kryptonite has been rendered harmless thanks to Color Boy turning it blue with his powers, thereby making it harmless to Superboy and Supergirl.

Retrieved from "https://heykidscomics.fandom.com/wiki/Adventure_Comics_Vol_1_351?oldid=1399482"
Community content is available under CC-BY-SA unless otherwise noted.