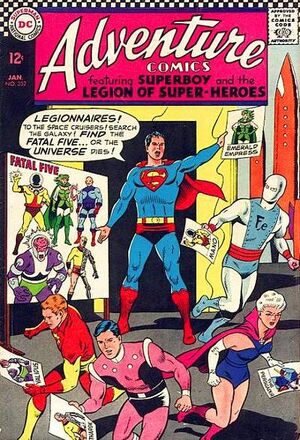 Appearing in "The Fatal Five"Edit

Synopsis for "The Fatal Five"Edit

In deep space, a lone member of the Science Police stationed on the United Planets Warning Station #156 detects a strange entity out in space which may threaten to destroy the entire universe.

Elsewhere, the Legion are reviewing a Science Police documentary of the universe's most dangerous criminals, dubbed the Fatal Five: the Persuader, armed with superstrength and an atomic axe; Tharok, a brilliant criminal who had half his body blasted away and replaced with robotic replacements; Sarya, the Emerald Empress of planet Vengar, armed with the Emerald Eye of Ekron to commit her crimes; The mentally powerful and insane creature Validus; and lastly, Mano from the planet Angtu who's mutant nature allows him to destroy things at a touch, who was so insane he used his touch to destroy his entire home world.

After watching the videos, Ferro Lad, Cosmic Boy, Sun Boy, and Princess Projectra retire for the night leaving Superboy on monitor duty. Their rest is short lived as Superboy is contacted by the Science Police and warned of the deadly threat that could possibly destroy the universe. Waking up the other Legion members, Superboy explains to them the threat: A powerful cosmic entity known as the Sun-Eater is traveling through the cosmos devouring all the stars in its path, threatening to destroy the entire universe. The United Planets have plotted the Sun-Eater's path and the Sol system, which includes Earth. With most of the other Legion members off world on other missions, remaining members of the Legion send out a distress call to other super-heroes in the universe to find them all decline aid for various reasons ranging from apathy to fear. With all hope seemingly lost, Cosmic Boy comes up with some inspiration: That they could perhaps convince the Fatal Five to help them in their cause to save the universe, hoping that the villain's desire for self preservation would work toward saving the universe.

With only two days to work with, the Legionnaires split up to gather the various members of the Fatal Five. Cosmic Boy goes after Tharok, and uses his magnetic powers to break into his heavily fortified space station. There, he appeals to Tharok's powerful intellect in challenging him to find the one in a billion chance to stop the Sun-Eater. However when the young hero has his back turned Tharok uses a ray-gun to incapacitate him.

Superboy has gone looking for the Emerald Empress and finds her on a small planet about to be burned at the stake by an angry mob. When Superboy carries her to safety, he asks why she didn't use her Emerald Eye to save herself. She reveals that it didn't have it's power source and reveals it to be a chunk of Kryptonite. Superboy is then quickly incapacitated by it's powerful rays. However the Boy of Steel manages to bargain his life by promising her a full pardon if she helps them stop the Sun-Eater.

Sun Boy has been charged with visiting the planet Bismari where the mad Validus is locked away in a cell awaiting execution. When Sun Boy offers him a full pardon and release if he aids in helping to destroy the Sun-Eater. Faced between freedom and death, Validus agrees to go with Sun Boy. While on one of Jupiter's moons, Princess Projectra finds the Persuader threatening to kill the governor of Jupiter for his attempts to get him removed from the planet. She uses her projection powers to tie up the Persuader and allow the governor a chance to flee. Persuader manages to break free of her illusions, and after hearing her story decides to join along, hoping to get a chance to fight those that are gathered and because he has an interest in the girl who has come to him.

Lastly, Ferro Lad has traveled out into deep space where he finds that the Science Police have captured Mano and are about to chop off his hand with a rocket guillotine. Ferro Lad stops this from happening and after a brief clash with the Science Police, he explains his need for Mano and the officers allow the Legion member to take him into custody and join the others. With the Fatal Five all gathered with the Legion, they rush off to meet with the Sun-Eater.

Retrieved from "https://heykidscomics.fandom.com/wiki/Adventure_Comics_Vol_1_352?oldid=1505636"
Community content is available under CC-BY-SA unless otherwise noted.