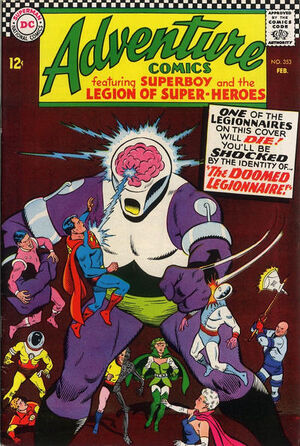 I must try something no one else would dare... I'll plunge into the very heart of the creature!

Appearing in "The Doomed Legionnaire!"Edit

Synopsis for "The Doomed Legionnaire!"Edit

The Legion of Super-Heroes are forced to team with the Fatal Five - the five most dangerous criminals in the known universe - to combat the Sun-Eater, a sinister force that threatens to consume every star in the universe and is on a direct course to the Sol system.

Collected at the Legion's Clubhouse, the heroes and villains allow Tharok to take control of the plans due to his superior intellect. Unfamiliar with the powers of the Fatal Five, he orders a demonstration of their powers. During Mano's display of his powers, his boasting irks the Persuader who then attempts to pick a fight with his fellow villain. The two villains prove to be equally matched and show no sign of stopping until the Emerald Empress and Validus use their powers to split them up. Satisfied with the results, Tharok orders them away while he formulates a plan. Unwilling to fully trust the villains they have brought into their Clubhouse, the Legionnaires agree to patrol the premises to make sure they don't cause any trouble.

That night, Mano decides to break into the room of Emerald Empress while she is gazing over a picture of Superboy. Mano then offers her to join him in taking over the universe together. Knowing that their two clashing personalities would never allow for them to work together, the Empress refuses. Furious, Mano attempts to use his destructive hand on her but she uses her Emerald Eye to eject him from the room. Investigating, Superboy is invited into her room. There, she asks the Boy of Steel to throw off his mission to stop the Sun-Eater and help her take over her home world and rule along side her. Superboy refuses and she attempts to threaten him with her chunk of Kryptonite but is forced to stop when Cosmic Boy enters the room to call them to the meeting room.

There they find that Tharok has formulated a plan: Luring the Sun-Eater with Sun Boy's powers they would trick the creature into flying into a trap where all the gathered members of the Legion and the Fatal Five will attack the creature with the full sum of their powers. When asked if they have the power to stop the creature, Tharok orders them into a special chambers that will boost all their powers to sufficient levels to theoretically destroy the Sun-Eater. While the process is taking place, nobody is aware that Tharok is also using the device to put the mad Validus under his complete control. With the process a complete success the Legion of Super-Heroes retire for the night. As the heroes sleep, the Fatal Five meet together in secret and plot to murder the entire Legion and with their only opposition out of the way, conquer the universe. This plot, with Tharok nominated as leader is agreed upon and the Fatal Five unites as a team.

The next day, the combined forces of the Legion of Super-Heroes and the Fatal Five get into their positions. Sun Boy succeeds in luring the Sun-Eater toward him with his boosted powers. Attacking it first is the Persuader, who only succeeds in chopping the creature into smaller portions. When Validus attempts to destroy them he finds himself overpowered, and when Superboy attempts to attack the creature he finds himself weakened when it bombards him with the energies of red suns that it has consumed. Further attempts by Cosmic Boy and the Emerald Empress also meet with failure. When Princess Projecta attempts to ward away the Sun-Eater with illusions she is at risk of death but is saved at the last minute by Validus. After Mano is injured by the creature, Ferro Lad attempts dives into the Sun-Eater's form and finds it's core. However, when he attempts to destroy it he finds himself repulsed.

Returning to their ship, the Legion and Fatal Five report their failure to Tharok. Tharok has been watching the battle and has used the information he's gathered to invent an Absorbatron Bomb to destroy the creature. When it's revealed that whoever uses it will be destroyed along with the Sun-Eater, Superboy volunteers to go first. This is stopped when Ferro Lad suddenly punches out Superboy and flies off into space with the device himself. The Legion can only watch in horror as Ferro Lad selflessly sacrifices his life to destroy the Sun-Eater. Mourning the loss of their comrade, the Legion members are then shackled by the Emerald Empress as the Fatal Five springs their betrayal on the Legion.

However, before they can be killed, Princess Projecta manages to convince Validus to shake Tharok's control and save them. Validus then attacks his fellow Fatal Five members with a mental bolt. When it strikes Persuader's axe, it causes a flash of light that causes them to disappear, making them wonder if the Fatal Five have been destroyed or transported somewhere else.

Later, when the other Legion members have returned from their various missions they prepare a special memorial rocket to send to the Shanghalia satellite for Ferro Lad. The rocket labeled with Ferro Lad's picture and a eulogy which reads:

In Memorium - Andrew Nolan (Ferro Lad) - A mutant whose non-human face was kept hidden behind a mask. He gave his life to save the Galaxy.