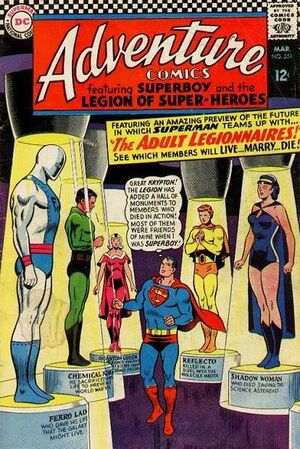 Bah! I'm glad he flopped! I, personally, want to kill the Legionnaires!

Appearing in "The Adult Legion!"Edit

Synopsis for "The Adult Legion!"Edit

Superman is summoned to the 30th Century to answer a call from the now-adult Legion of Super-Heroes. Arriving at their new headquarters, Superman enters the building and takes a stroll through the hall commemorating fallen Legion members and another room with statues commemorating Legion romances. He is met by the adult Brainiac 5 who takes Superman on a tour of their new base.

Entering the main communication room, Brainiac 5 puts Superman in touch with former members of the Legion: He learns that Ultra Man and Phantom Woman are a married couple, Ultra Man is a reservist with the Legion and also works as director of the Science Police and have two children of their own; He also learns that Mon-El has retired from the Legion to become a space explorer; That Night Woman is now a member of the Legion married to Cosmic Man; He learns that Lone Wolf is now married to Light Lady and they have three children; Shrinking Violet is married to a Legion member named Duplicate Boy; Matter-Eater Lad is the president of the planet Bismoll; Colossal Man left the Legion and landed a job at the Cosmic Directorate after an injury robbed him of his powers; and that Star Man and Dreamgirl, as well as Bouncing Boy and Duo Damsel have retired to marry and have children.

Returning to the Legion meeting room, Superman is surprised to see that Polar Man is now a member of the Legion of Super-Heroes and learns that many members of the Legion of Substitute Heroes had joined with the Legion. With the arrival of Cosmic Man, and Saturn Woman, the meeting is called to order. Cosmic Man informs those gathered that their new headquarters has been subject to a series of attacks by someone who has insider knowledge of the group, prompting all gathered to contemplate who their attacker might be. Their thoughts are interrupted when they are called by the Science Police to help prevent the collapse of Grand Central Spaceport. Cosmic Man, Polar Man, and Element Man swings into action to fix the damage and prevent a disaster from happening.

While this is happening, someone cuts off the power at the Legion headquarters leaving the remaining Legion members to stumble around their base. They are then attacked by a masked villain who is surprised to find that Superman is present with the group. In an attempt to stop the Legion from capturing him he grabs Saturn Woman as a hostage, however she elbows him in the stomach. Although the attackers strong body breaks Saturn Woman's arm, it injures the villain significantly enough to flee the scene. As the Legion examines the clues, Superman takes a stroll past the hall of the dead and notices that all the statues have reefs on them except for Ferro Lad's, allowing Superman to correctly deduce who their attacker is.

Later the Legion of Super-Heroes are struck by the mystery villain again. With the Cosmic Man, Element Man, and Brainiac 5 incapacitated with a reflex-inhibiting gas and Superman pinned with Kryptonite bonds, the mystery attacker begins to beat on the Legionnaires. When Lightning Man, Saturn Woman, and Polar Man attempt to counter attack the gas and their attacker's superior strength easily over powers them.

However, Superman had time to warn the Legion of their attackers true identity and as such they have prepared for the attack: Superman and Cosmic King had secretly switched places, and with the switch unknown to the attacker they manage to trip him up with the switch-around. After the villain is captured he is unmasked and they learn that their attacker is none other than Ferro Lad's twin brother, who for years blamed the Legion for his brothers death and plotted to get revenge against them. Realizing that this new Ferro Man is mentally ill they turn him over to Psycho-Care while they contemplate who might have put Ferro Man up to this, unaware that it is their old foes the Legion of Super-Villains, who upon learning of Ferro Man's failure begin to plot to eliminate their foes themselves.

Retrieved from "https://heykidscomics.fandom.com/wiki/Adventure_Comics_Vol_1_354?oldid=1399485"
Community content is available under CC-BY-SA unless otherwise noted.