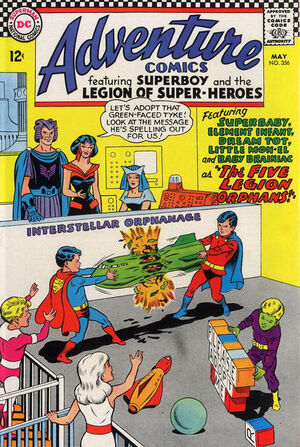 Appearing in "The Five Legion Orphans!"Edit

Synopsis for "The Five Legion Orphans!"Edit

It's Parent's Day in the 30th Century and while the majority of the Legion of Super-Heroes are off celebrating with their parents, Superboy, Brainiac 5, Mon-El, Dream Girl, and Element Lad, all orphans stay behind at the Legion Club-House to monitor things.

The group get a distress call from the planet Zenith, who's power crystal that powers the planet has been stolen by raiders. Racing out into space, the five orphan Legion members go after the raiders to take back the stolen crystal. When they arrive on planet Zenith they learn that the raiders have left and ditched the power crystal in a nearby pond. While Superboy and Mon-El race off to capture the raiders the others dive down into the pond to collect the stolen crystal. However, when they attempt to lift it, the crystal causes their bodies to physically regress in age. When Superboy and Mon-El arrive, Brainiac 5 warns them of the crystals power. Ignoring his warnings, the two heroes dive into the water and collect the crystal. It has the same effect on them, changing them all into five year old children and reverting their minds to the same mentality.

They are picked up by a police patrol and brought to an interstellar orphanage, only Brainaic 5 has managed to maintain his mental status and attempts to get adopted so that he might find a way to restore the other Legion members back to normal. Unfortunately for Brainaic 5, the others are adopted by families first when impressing them with their super-abilities.

While back at the Legion Club-House, Invisible Kid, Matter-Eater Lad and Cosmic Boy have returned from the Parents Day festivities and find that the members they left behind had gone out on a mission to the planet Zenith and rush to the planet to see if their comrades need any help.

While back on Zenith, the five adopted Legion members are put into a pre-school and are playing when Mon-El suddenly begins to succumb to his weakness to lead. Quickly utilizing a chemistry set, Brainiac 5 devises a means to restore the Legion members back to normal and cure Mon-El of his lead weakness again. Restored to their normal ages, the Legion members demand an explanation from their "foster parents" as to why everyone on this planet adopts intergalactic orphans. One of their numbers explains that two years ago a meteor exploded outside of their planets atmosphere caused all the children on their world to die and made it unable for them to have children, however when they learned that the radioactivity from the meteor would not effect beings from another world. When they learned that five of the Legion of Super-Heroes were orphans they contrived the entire plot to regress their ages and adopt them.

With the elaborate plan revealed, Brainiac 5 informs them that Mon-El's weakness to lead resurfaced without any physical lead in sight, he deduced that the radioactive fallout from the meteor had turned into harmless lead particles. With confirmation from Dream Girl, Brainiac 5 tells the people of Zenith that they should now be able to have more children. With all restored to normal the Legion leaves the planet without pressing charges and reunite with their comrades back on Earth.

Appearing in "Lana Lang and the Legion of Super-Heroes!"Edit

Synopsis for "Lana Lang and the Legion of Super-Heroes!"Edit

Lana Lang is once more trying to win Superboy's affections, when the Boy of Steel is summoned to a cave near Smallville where he meets a super-hero calling himself Star Boy. Coming from the 30th Century and the planet Xanthu, Star Boy explains that he has similar super-powers to Superboy. He goes on to explain that he is also a member of the Legion of Super-Heroes, and that he has traveled into the past to stop two Xenthuian criminals who had escaped into this era and are hiding out on Earth. However, Starboy's X-ray vision cannot penetrate copper and so has asked Superboy's help who's x-ray vision will be able to see through the copper piping used in Smallville's water system to find the criminals, who have been hiding in underground caverns.

Lana Lang stumbles upon the two young heroes just as they finished capturing the Xanthuian criminals, and in order to get Superboy jealous, Lana bluffs Star Boy into believing she overheard his secret identity and forces him to pretend to be her boyfriend in order to make Superboy jealous. Traveling to the 30th Century with Superboy and Star Boy, Lana has the latter do whatever it takes to try and make Superboy jealous. However, Superboy sees through this ploy and ignores everything and even goes so far as to "date" a Xantharian girl, which causes Lana herself to become jealous and admit to the whole deception. With Lana having learned her lesson, the two teens from the 20th Century return to their own time.

Retrieved from "https://heykidscomics.fandom.com/wiki/Adventure_Comics_Vol_1_356?oldid=1399487"
Community content is available under CC-BY-SA unless otherwise noted.